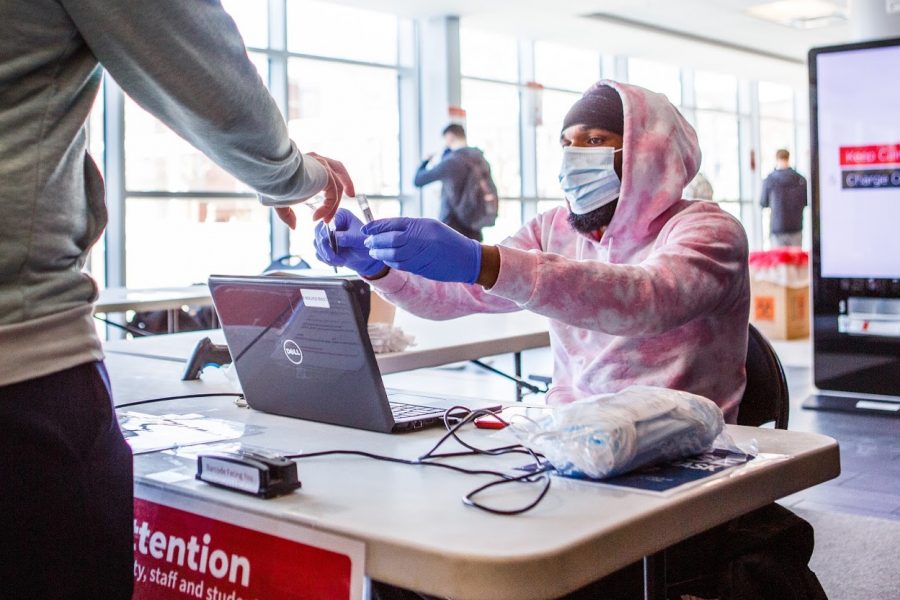 Illinois student Seth Patterson receives the tube for his University COVID-19 test at the ARC on Feb. 1.

The SHIELD Illinois program continues to expand the saliva-based test nationwide as more facilities and universities notice how accurate and accessible this testing is and request these services.

Many universities have adopted saliva-based testing for their locations in order to crack down on COVID-19 cases on their campuses and create a safe environment for their community.

Several mobile labs have been set up through Bloom Energy in Sunnyvale, California.

According to Bill Jackson, leader of SHIELD T3, there are several other universities across the world that are also using the saliva test along with an international service agreement with Rako Science in New Zealand that is currently in the works.

SHIELD T3 is an organization created by the University of Illinois system in order to expand the saliva-based testing program nationwide.

Universities that have adopted this saliva-based test have recently made the transition from the original nasal swab test and have been adapting to this change.

“As a patient myself, I think the saliva test is a lot quicker in terms of results and the nasal tests required a little bit more planning ahead of time just because it took longer,” said Sameer Chabbra, student at North Central College.

According to Chabbra due to the new testing method, the COVID-19 procedure at the location has become more organized than before.

Once these schools adopt UI’s tests, the testing practices and terminology they use is entirely up to them. Loyola calls the saliva tests “surveillance tests.”

The University of Wisconsin-Madison has conducted the highest number of tests among SHIELD clients, averaging 5,667 tests per day for the last week. Just like the UI, there were some kinks to work out at the beginning of implementation.

“Overall, we have gotten used to the new testing but in the beginning, a lot of the people I know kept on getting their test rejected. I know one guy had his test rejected three times in a row and had to keep redoing them,” said Ali Qureshi, student at the University of Wisconsin-Madison.

The SHIELD program is aware of samples being rejected due to contamination with things such as mouthwash, phlegm, or tobacco because these samples must be clear in order to process properly.

“The sample can’t have anything in it but saliva; it needs to be clear in color. So we’ve recently created a video to help people learn how to properly drool into the vial and are starting to share that with our clients,” Jackson said.

In order for an organization to receive these saliva tests, they must contact the SHIELD program and get approval in order to go forth with the process. A client could potentially enter a service agreement or hire the program to put a mobile lab at the client’s location.

“We have three types of customers: one where we are hired to put a mobile lab at client site and run that lab, another type of customer who enters into a service agreement, and the third group which is most often other universities with existing labs that we share our protocols with for free,” Jackson said.

The SHIELD team hopes to pursue further widespread testing opportunities in order to protect lives and potentially become the nation’s preferred COVID-19 testing system in the near future.