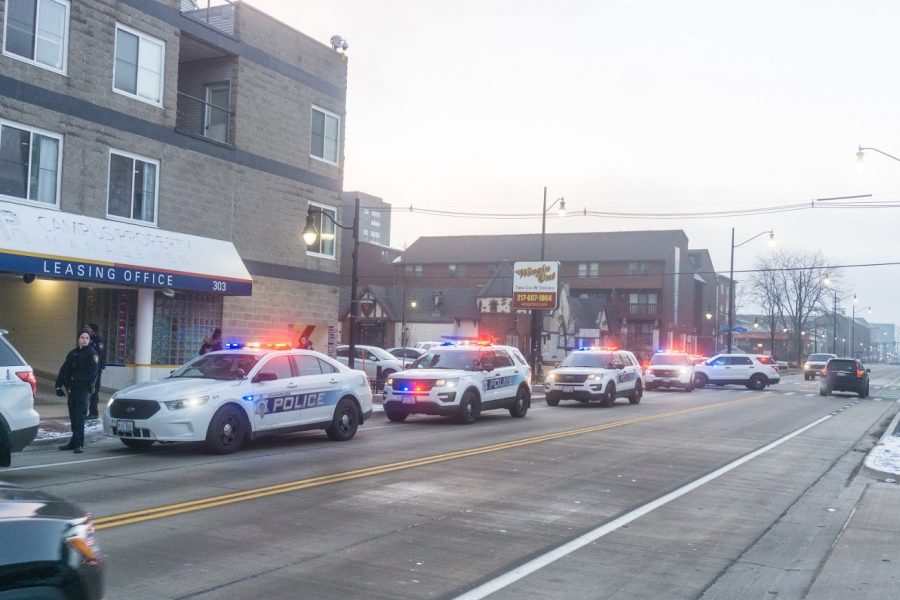 Champaign-Urbana police respond to a call on Green street on Dec. 10, 2018. The department is developing alternate responses for mental health crises.

Urbana and Champaign police departments are in the early development stages of a collaborative alternate response option: a co-responder model that would allow social workers to respond to mental health crises in certain situations.

Certain officers complete additional crisis intervention team training which is a more advanced form of mental health training. This team has “been a driving force behind what we locally named as One Door,”  according to Seraphin.

The major concept that the departments are still working on is the most efficient way to get police officers and mental health officials to work together and also to enhance the skills of officers who respond to these calls.

“The idea is to get the person in crisis services that they need as opposed to simply sending police there,” Seraphin said.

This program will be developed with further research of other types of the success of co-responder models in different cities as well as an evaluation of calls for service according to Tom Yelich, public information officer for the Champaign Police Department.

The implementation of this pilot is influenced by community input that “police are not the appropriate responders for every need,” according to a Champaign City Council report. After research, Yelich said the department will “frame what this concept will look like for future consideration by our elected officials.”

Seraphin said that the logistics who would respond to which calls are still being sorted out. He noted that there are certain situations where someone might be clearly having a mental crisis, but the danger affiliated with the situation might still require police presence.

Different dispatch centers are in charge of calls received from different areas. As this concept develops further, the expertise will most likely go to the dispatch centers on deciding who to send in certain situations, Seraphin explained.

“Our hope is to begin moving forward towards these improved co-responder models in the future because we understand that’s a community need,” Yelich said.

Yelich said that this is currently “just a concept right now that needs further research” with no specific timeline of when it will be implemented. Seraphin explained that the program will begin “sooner rather than later.”

The Champaign County Mental Health Board, two different hospitals and two different police agencies are involved in this process, so “to get all of the pieces and parts lined up is quite an undertaking,” according to Seraphin.

There are still ongoing meetings and conversations regarding this pilot program. Seraphin said that the departments plan to pilot the program in a “small area” in Urbana once they finalize the details.