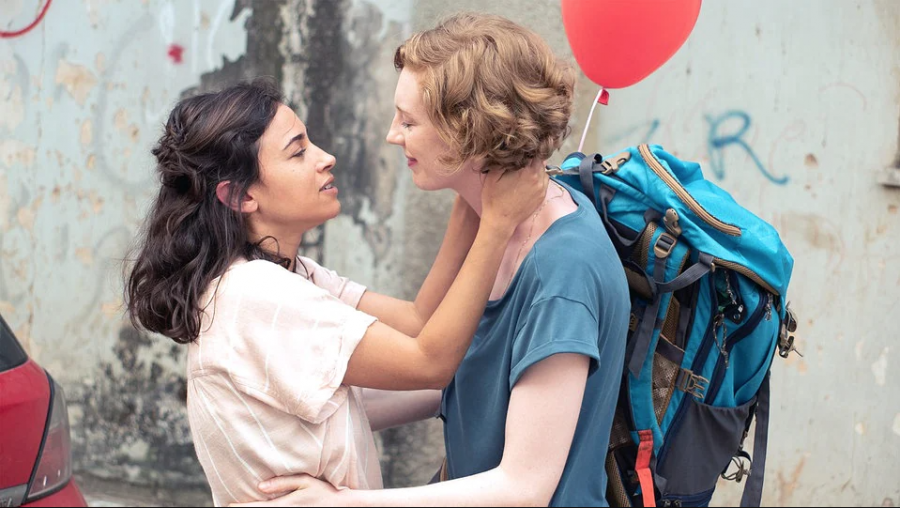 Luise Wolfram and Moran Rosenblatt star in “Kiss Me Kosher.” The film was released on Sept. 10. The film goes over cultural and historical differences of an Israeli woman marrying outside of her religion.

Viewers interested in learning more about Jewish culture through film should look out for the Champaign-Urbana Jewish Federation’s annual Jewish Film Festival. Screening of the first film, “Kiss Me Kosher,” will start on March 19, with virtual discussion sessions about the film’s themes and topics on March 21.
The film tells the story of Israeli Shira, who wants to marry her German fiancee Maria in Jerusalem. The couple must overcome the cultural and historical differences between their two families, as well as Shira’s grandmother, who attempts to prevent the marriage.
“The film offers an interesting and original take on different segments of Israeli society,” said associate professor in LAS, Rachel S. Harris.
“It highlights the many divisions of Israeli society,” Harris said. Not only does the film cover the German-Israeli cultural and historical difficulties which Shira and Maria face, but it also delves into the Israeli-Palestinian conflict, with Shira’s grandmother in a secret relationship with her Palestinian neighbor.
Such an expansive film requires an equally expansive cast, as the film “includes a mixed cast of a German, American and a pretty well-known Palestinian actor,” Harris said.
Harris will lead the Champaign-Urbana Jewish Federation discussion of the film on March 21 at 7 p.m. The Jewish Community Center of Chicago will also feature a discussion with the film’s producer, Christine Guenther, on the same day at 11 a.m.
In order to watch the film and attend the discussion, viewers will need to buy tickets for $15 online.
The Jewish Film Festival, which began in order to inform audiences of issues in Jewish culture through the perspective of Jewish filmmakers and writers, will continue until June and will feature other films such as A Starry Sky Above the Roman Ghetto, Tango Shalom and Dayan, the First Family.
In 2019, the festival drew over 17,000 moviegoers. However, how the effects of the ongoing COVID-19 pandemic will impact that figure remains to be seen.