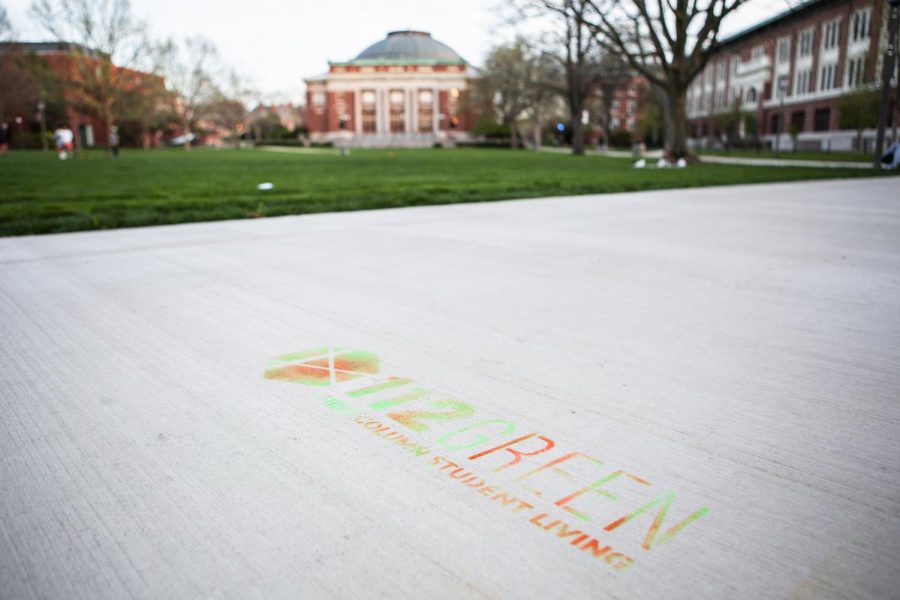 Painted advertisements for First Column Student Living have remained largely intact on the sidewalks of the Main Quad, drawing an overwhelmingly negative response from the student body.
It has been two weeks since pictures of the advertisements were first posted on the r/UIUC subreddit. As of Saturday, most of the advertisements were still clearly visible on the Main Quad sidewalks.
Since the initial Reddit post, First Column has received a barrage of negative Google reviews and additional Reddit posts from dissatisfied students. The company has responded to the reviews in various ways, ranging from claiming “fake review” to more thorough responses.
“Steven, we did not chalk campus without permission. The student union gave us permission to chalk,” one response noted.
Claudia Kubarycz, graduate student in FAA, was outspoken in her criticism of the advertisements.
“I was very upset to see the spray-painted advertisements on the sidewalks because the (Main) Quad is a place that is enjoyed and respected by thousands of students, faculty, alumni and other University affiliates as the beautiful and symbolic center of (the University),” Kubarycz said. “It is unfortunate that local businesses do not seem to share in that sentiment.”
A Reddit account claiming to represent First Column later stated that the initial responses were the result of a misunderstanding and apologized for potentially making matters worse, adding,“The permission we originally obtained from the Illini Union was in error.”
According to Illini Union Director Rebecca Salzman, First Column never contacted any official Union personnel regarding the ads. However, the Union only has authority over advertisements placed on and inside the building and does not grant permission for advertisements on the Main Quad sidewalks or any other part of campus.
Kubarycz also believes the company could have done a better job of taking ownership of the mistake, explaining that denial and aggressiveness set a bad tone for a company students entrust with their living arrangements.
Although the Union doesn’t grant permission for chalk art and painted advertisements, the Student Code of Conduct clearly states the permitted uses of chalk on campus sidewalks.
“The use of water-soluble chalk, easily removed by rain, for the purposes of promoting events, encouraging participation in student elections and expression of current issues is permissible on University sidewalks,” according to the Student Code of Conduct.
It is apparent that the advertisements were not painted with water-soluble material, as they have remained largely unscathed despite several instances of rain in the past two weeks. Additionally, ‘corporate advertisement’ is not listed as a valid reason under the Student Code.
First Column declined to comment.