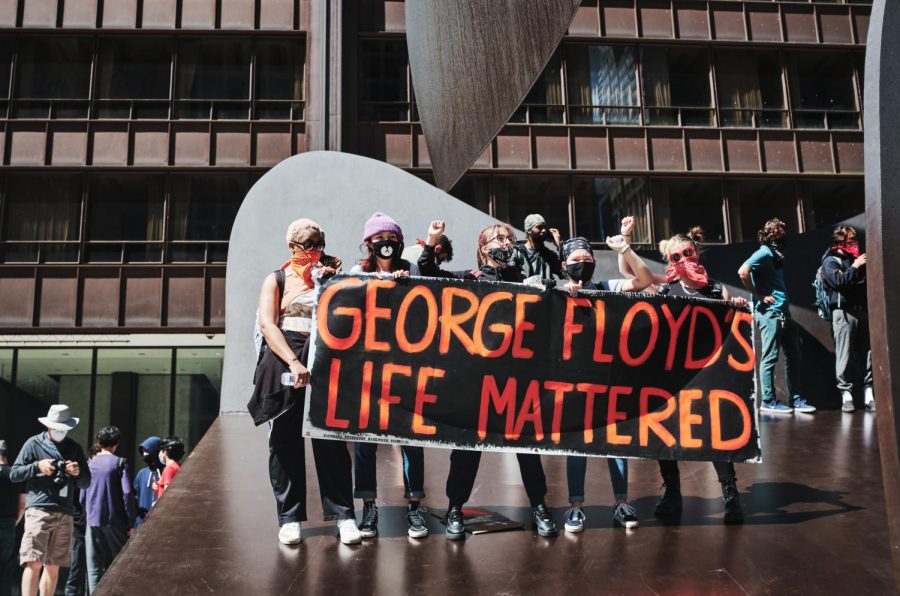 A group of protestors hold a sign reading “George Floyd’s Life Mattered” in downtown Chicago on May 30. The University recently sent a Massmail to students after Derek Chauvin was convicted of murder calling for the public to take action against systemic racism.

The University released a Massmail Tuesday shortly after the George Floyd trial came to a close, calling for a public commitment to take action against systemic racism.

Former Minneapolis police officer Derek Chauvin was convicted of murder and manslaughter in the death of George Floyd, who was killed last year on May 25, after being handcuffed and pinned to the ground under Chauvin’s knee.

“We hope today’s jury decision gives Mr. Floyd’s family some small sense of closure and a measure of justice, ” the Massmail said. “But no court can reverse his senseless death. And no verdict will erase their grief, anger and loss. Our thoughts are with his family and friends today.”

The Massmail calls on the community and nation to take action and dismantle the conditions of systemic racism and social injustice in America.

The Massmail also mentions the killings of Eric Garner, Ahmaud Arbery, Breonna Taylor, Daunte Wright and Adam Toledo, calling them “an unacceptable consequence of our current system of policing and criminal justice.”

The University recently launched a Call to Action Research Program addressing racism and social injustice in the wake of this year’s violence.

“We are engaged in an active review of the role our own university has played in creating these systems, the histories that we have failed to address and the public safety processes and policies we have in place,” the Massmail said.

The University has $2 million to allocate across research areas.

“Today we state unequivocally that we are ready to invest the resources, the time and the necessary effort to repair this damage and to reimagine and rebuild these systems,” the Massmail said.

According to the Massmail, the University will bring the working group recommendations to the broader University community this summer.

The University will provide more information about the listening group sessions in the coming months. The sessions will continue in the fall, allowing students who want to participate the opportunity to share their perspectives.

“These listening sessions will help us discuss the paths forward that we together will choose to prioritize through a collaborative process,” the Massmail said.