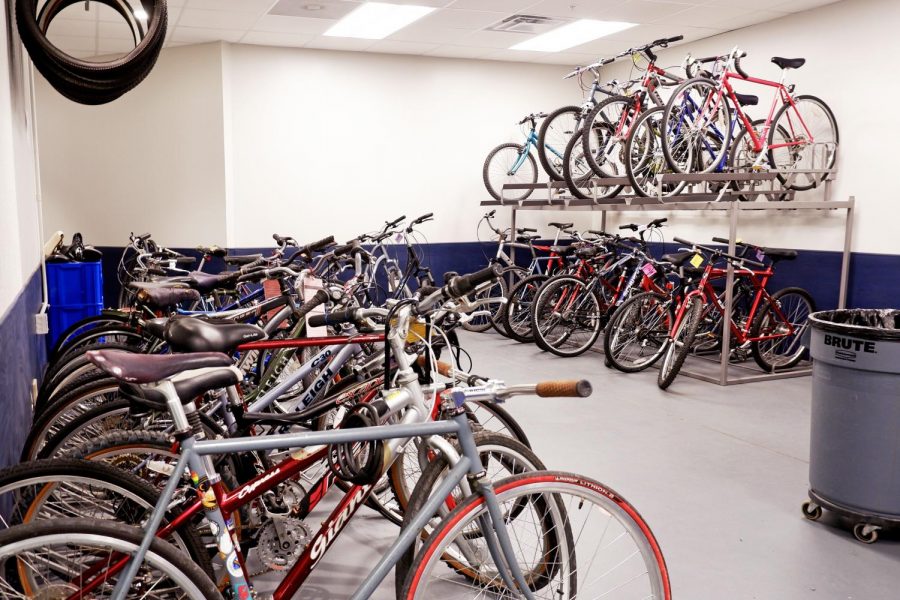 A row of bikes is lined up inside the Campus Bike Center on April 6. The University Facilities and Services teamed up with Champaign County Bikes to host a bicycle census on Wednesday.

University Facilities and Services and Champaign County Bikes hosted a bicycle census on Wednesday, where volunteers walked around campus and collected data on the bicycles present during peak hours.
Using a smartphone app, the volunteers covered 29 areas, documenting the number of bicycles on and off of bike racks, along with information about the racks themselves, “including the type, capacity and how the structures are installed,” according to a University website about the bike census.
The collected data will be used to update the University’s bicycle database, which “is used to identify high-ridership locations for mobility and safety improvements,” according to a Facilities and Services press release.
The database also serves as a guide for “bicycle and active transportation projects, such as complete streets and bike rack upgrades.”
First held in 2013, the University has since endeavored to perform at least one bike census every year. The annual census helps support the University’s ongoing efforts to remain a bicycle friendly university, a status conferred to the University by the League of American Bicyclists in 2011.
In 2019, the University was promoted to a silver-level bicycle friendly university.
The University expects that this year’s bicycle data will be affected by the ongoing pandemic, as many students, faculty and staff remain off-campus.
Nevertheless, the University believes that this year’s census provides “a unique look” into bicycle use on campus.
“This effort will give us a unique look at how individuals throughout Urbana-Champaign are presently utilizing the UIUC bicycle network and show the impact that bike path improvements, parking upgrades, and online bicycle registration are still making,” said Sarthak Prasad, sustainable transportation assistant for Facilities and Services, in the press release.