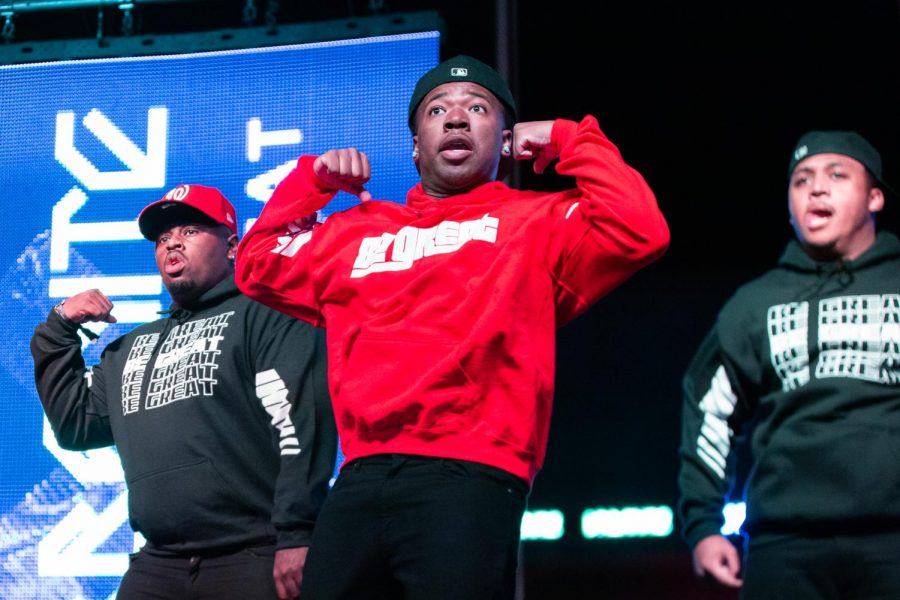 Kida The Great performs on stage at the URBANITE Dance Showcase on Saturday at Memorial Stadium. This event is the first of many in-person gatherings the University plans to host for students since the Covid-19 pandemic began.

With the increase in total vaccinations and decrease in COVID-19 infections in Champaign County, the University has been able to host more in-person events at Memorial Stadium.

The Urbanite Dance Showcase is held every year at the University. A number of dance teams perform during this event. Some of the dance teams that performed at the event are House of JIT, FIZAA, 2XS CALIENTE, IMAGINATION, BOUJETTO STILETTO and 2XS UIUC.

“Overall I thought the event was pretty cool,” Dadar said. “I was able to relax and watch a movie while still having a good time with my friends. Watching it at the Memorial Stadium added more of a comforting vibe to the experience.”

Dadar also mentioned that she would love to see Memorial Stadium host more events like the one she attended.

Victoria Kravchuk, freshman in Business, attended the Urbanite Dance Showcase. She said she had a lot of fun at the event and would recommend others to go to Urbanite’s events.

“I have attended the movie nights and a concert at the stadium. I definitely want more events like this. These events were really fun and a great way to spend time with friends but also meet new people across campus,” Kravchuk said.

Kravchuk also mentioned that having these events is a great change from the overall lack of in-person events this semester.

“I think it is good that we are getting back to some sort of normalcy,” Melchior said. “I have not been out there to see how many people are out there, but it sounds like there is a pretty big number of them.”

Melchior also mentioned that it seemed like everyone was being socially responsible and everyone he saw had a mask on, even though it was an outdoors event.

“They usually have this event at a smaller venue,” Melchior said. “They had it here at the stadium this year because we can put a lot of people here while still maintaining distance.”