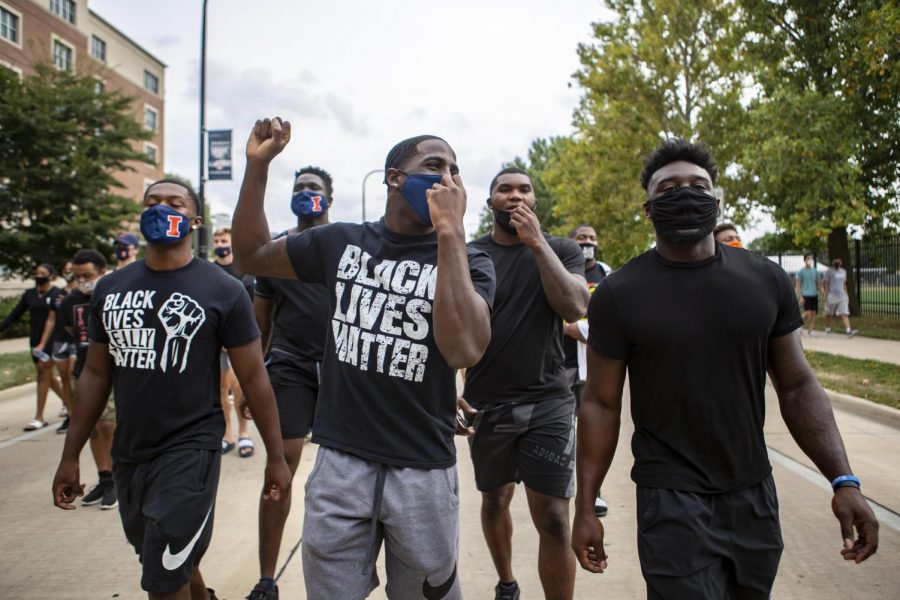 With this entire school year having taken place in the midst of a pandemic, it was like no other. Here is a look at the top five moments of the 2020-21 school year, in no particular order.

On March 14, the Illini won the Big Ten Men’s Basketball Championship. The Illini were awarded No.1 seed in the Midwest region for the first time since 2005 and the fourth time in school history. Students celebrated this historical moment by rushing the Main Quad, rallying around Alma Mater and even lighting fireworks. Festivities lasted well into the evening, with Green Street busier than usual on a Sunday night. Although the Illini’s run was cut short in March Madness, the Big Ten win and following celebrations were memorable moments for Illini fans.

This year saw multiple advances in social justice, such as the Black Lives Matter movement and local activists advocating for change in C-U. Over the summer, protesters engaged in a series of marches in C-U, demanding police reform. The Champaign County Community Coalition also met and began the process of discussing police reform locally.
In late March, 78% of voting students voted to reallocate the University of Illinois Police Department funding. The referendum was to reallocate 25% of the total UIPD budget, which is roughly two million dollars. The reallocation focuses on investing in more community services and less policing. However, it is not set in stone yet. Since students voted to approve the referendum, it now takes the form of an administrative recommendation, which has to pass a review process by the Board of Trustees and the University.
This semester also saw an increase in anti-Asian sentiments nationwide. In April, the C-U community rallied in support of the Asian American Pacific Islander community, holding protests to stand against Asian-targeted violence.

This school year saw high-profile dismissals of students, especially relating to COVID-19 testing noncompliance. Ivor Chen, graduate student in Engineering, was dismissed by the University Jan. 29. After his case received international attention and pressure from the Illinois legislature, and with a petition reaching over 40,000 signatures, the University reinstated Chen on Feb. 16. Chen’s case highlighted the lack of clarity regarding COVID-19 discipline policies, according to the Graduate Employees’ Organization. Antonio Ruiz, graduate student in LAS, was also dismissed from the University March 25 for testing noncompliance, after Ruiz failed to utilize the saliva-based test due to disabilities.