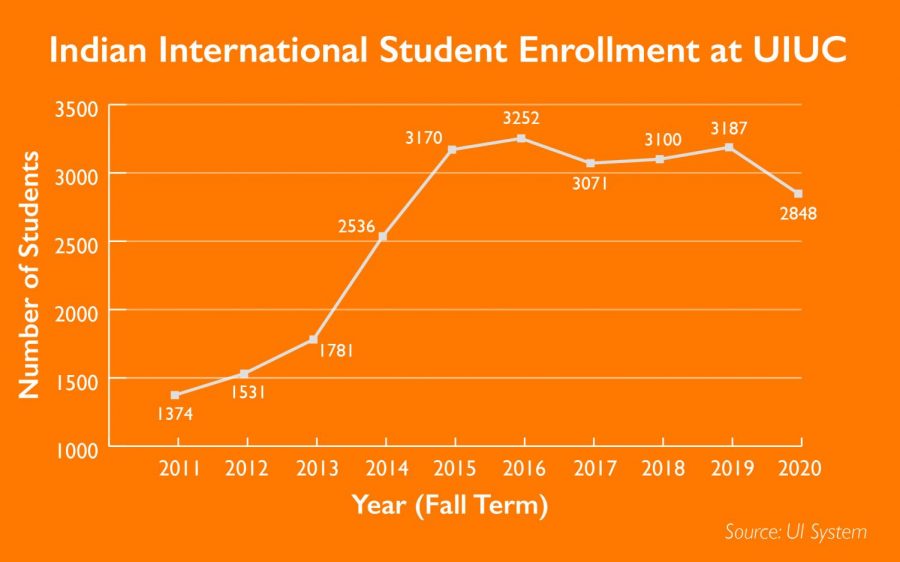 Plans to open a University of Illinois system liaison office in India were approved by the system’s Board of Trustees at the end of July.

Pradeep Khanna, associate vice chancellor for corporate relations and economic development at the University, said the goal of this new office is to build international relationships. Khanna handles international engagement at the system level.

“I think international collaboration and partnerships have been an integral part of U of I’s culture for a very long time,” Khanna said. “They benefit our community, by that I mean our students, our faculty, our researchers.”

Goals for the office include building an alumni network, creating relationships with Indian universities and corporations, facilitating research and supporting student recruitment, according to a press release.

The plan is to open a University liaison office in New Delhi, India, and a branch office in Bengaluru, as stated in the press release. Plans were first made in 2014, following the opening of an office in China, but were stopped due to state budget issues.

India’s fast-growing economy was one reason for the University’s motivation to make plans for the liaison office, Khanna said.

Student recruitment is one such goal of the liaison office, according to UI system officials.

At the University, there’s a large number of Indian international students, Khanna said, and a liaison office would help make student and faculty travel between countries easier.

“That office can provide local support, which will make it easier for (students and faculty) to do their work in India, or whatever objective they have in India,” he said.

Vidhisha Ajmera, sophomore in Business and an international student from India, said the plans for opening this office “sounds amazing” and that she’s interested in this student recruitment aspect.

“I think it’s a great resource for students,” Ajmera said.

Most students aren’t aware of all the opportunities there are when going to school internationally, she added.

Ajmera wasn’t aware of opportunities like studying abroad, all the different RSOs and the details about programs in her college until after a year on campus.

“That all happened after I came here,” Ajmera said. “When I was applying, I didn’t know much, I don’t think I had all the resources.”

Going to school internationally has disadvantages and lots of advantages, Ajmera said.

“The exposure, the independence, the way of learning – it’s completely different from what we’re used to back home,” she said. “It’s very restrictive in India, you can explore (in the U.S.). It’s a whole new experience and you definitely step out of your comfort zone.”

Ajmera said that because the University is well-known for areas of study like engineering and computer science, other programs such as business or liberal arts are not as promoted to international students.

Aryaman Sheth, junior in Business, said the humanities can be left out and that the University doesn’t have as strong of a connection with international Indian students when it comes to these areas.

The next step in the plans is to submit an application to the Reserve Bank of India, Khanna said, and they’re hopeful that an office will be open by fall 2022.

Khanna said there are a lot of opportunities to connect with the Indian economy and its growing higher education sector through this liaison office.

India has the world’s third largest economy, according to the World Bank. Like much of the world, their economy experienced a slowdown during the COVID-19 pandemic.

Having initiatives, such as liaison offices, in different countries is a good way to come up with new ideas to solve problems, Ajmera said.

“Colleges bring in diversity,” she said. “It’s the future of society because it helps us think beyond what we know. The uniqueness of ideas that come from so many different people and experiences helps facilitate research and creativity.”

International outreach is important for the future of our society because everything is connected, Khanna said.

“We live in a connected world,” he said. “We have shared problems, what happens in one part of the world impacts the entire world.”

Issues relating to human health, equity, supply chains and social justice affect everyone, Khanna said. International outreach, such as through a school liaison office, could help facilitate conversations about solutions to these issues, he said.

“Given the interconnectedness of our world, it’s important for us to be on top of understanding the world economy, world politics, world cultures and to see how partnerships will enhance our capacities to tackle these difficulties,” Khanna said.