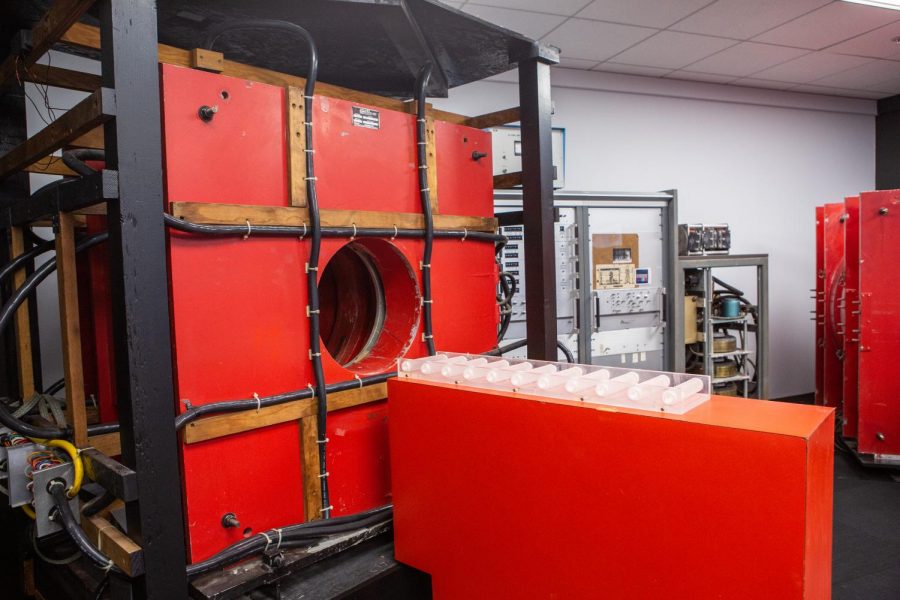 In an old storage shed in Urbana, a piece of history rested quietly for decades. The 3,500 pound magnet is called Big Red, the first human MRI scanner.

Late University faculty member Paul Lauterbur invented the MRI on Sept. 2, 1971. The idea of an MRI first occurred to him while eating a burger at a fast food joint.

“Seeing Big Red sitting there, right when the door opened, I was amazed,” said Brad Sutton, technical director of Beckman’s Biomedical Imaging Center, who discovered the artifact in 2017.

Now, Big Red, along with a scanned copy of some of Lauterber’s research pages and other artifacts, is on display in the Illinois MRI Exhibit at Beckman Institute to celebrate the 50th anniversary of the invention.

The University has a unique history when it comes to the development of the MRI.

“What people don’t know is that so many people at Illinois– faculty and past students– really had a huge impact on the invention of MRI,” Sutton said.

The 2003 Nobel Prize for developing the MRI was awarded to Lauterbur, who shared it with Peter Mansfield, postdoctoral researcher at the University from 1962 to 1964.

The exhibit houses various touchscreens with photos, infographics and text, outlining the history of the University’s contributions to the MRI.

Sutton and others are combing through Lauterbur’s notes and research left in the shed, from notes on conferences to various experiences Lauterbur had.

The process is described by Sutton as looking through a closet in which things are not necessarily sequentially laid out. Rather, Sutton and others are trying to establish the order of notes and what role they played in shaping Lauterbur’s ideas.

“Paul was really good about developing things that are important … and he’s writing out what he thinks can be possible, he envisioned a lot of what we can now do, and then some,” Sutton said.

Throughout the pandemic, Beckman Institute has revamped their technology. They have a 7 Tesla magnet, one of the first 10 in the country and the only one in the state.

According to Sutton, the exhibit is anticipated to be up until there can be a big gathering to officially celebrate the anniversary of the MRI.

“It’s really great that this exhibit can live in this building and Beckman Institute because of how much is going on here to really even further (the understanding of) how the brain works,” Sutton said.