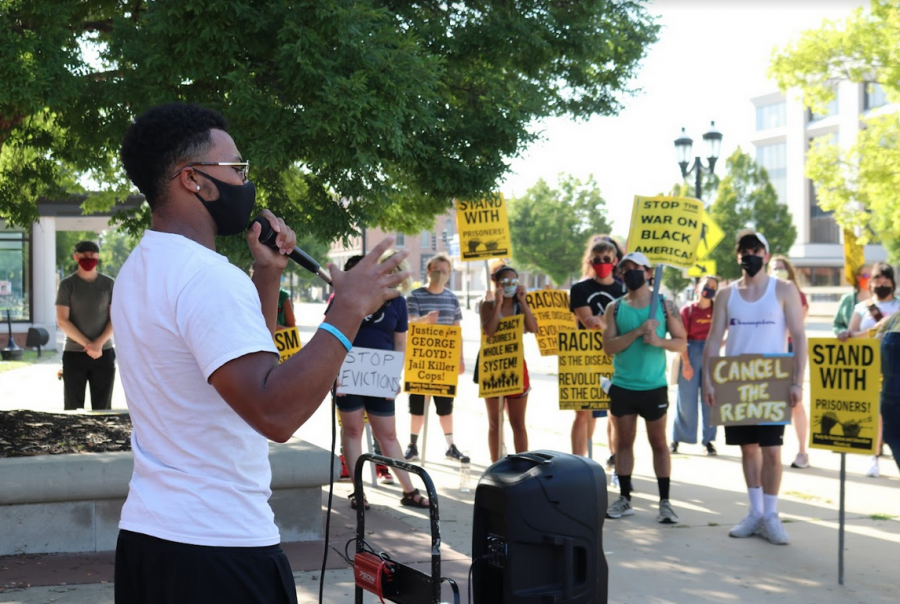 A protestor speaks in front of a group of people standing in solidarity against racism at the Black August protest on Aug. 28 outside the Sheriffs office in Champaign. The Party for Socialism and Liberation have been protesting the removal of the eviction moratorium.

The Black August protest took place on Aug. 28 outside the Sheriff’s office hosted by the Party for Socialism and Liberation to protest the removal of the eviction moratorium.

The rally took place in order to demand the end of police militarization, fix jail conditions as well as how the incarcerated are treated and called for the Sheriff to refuse to carry out evictions.

The eviction moratorium was removed by the Supreme Court on Aug. 26, which prohibited landlords from evicting tenants from their homes for a certain period of time due to the financial crisis many were going through due to the pandemic.

“We specifically want to put pressure on the Sheriff, we were protesting outside the Sheriff’s office because the Sheriff has the power to change a lot of these things,” said Hrant Kebantsi, one of the organizers for the Party for Socialism and Liberation Rally.

The Party for Socialism and Liberation party works toward replacing capitalist institutions and guaranteeing rights like housing, universal health care and fighting for the liberation of oppressed communities. The Champaign-Urbana branch is currently working to aid the community with these rallies.

“In the coming weeks, we’re going to be going around communities in Champaign-Urbana, collecting signatures, for a letter demanding both that no evictions are carried out by the county sheriff’s department and demanding the cancellation of rent mortgage debt,” Kebantsi said.

Even with the federal moratorium being struck down, Gov. J.B. Pritzker announced on Aug. 20 that there would be an extension of the Illinois Eviction Moratorium until Sept. 18 for residents.

With this temporary moratorium, organizations continue to push local and state governments to further extend the moratorium and provide additional relief for residents struggling during this time.

“I feel that as a student, it’s especially important for us to be advocating for this because a lot of us are gentrifying these communities and making the prices for housing just go up in the local community,” said Sireen Amra, junior in LAS. “I personally feel responsible, which is why I think it’s important for students to be acting and organizing in order to prevent anyone from being evicted in the local community.”