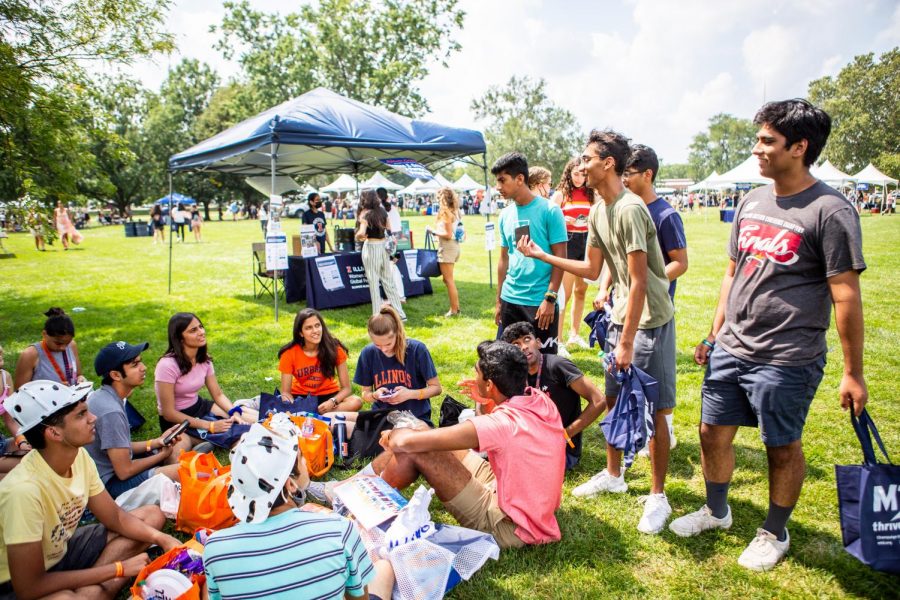 A group of University of Illinois freshman sit in a circle during the Welcome Celebration in Lot 31 after the New Student Convocation on Aug. 20. The University reported on Wednesday that the 2021-22 freshmen class is the largest class to be enrolled.

The University reported Wednesday their largest freshman enrollment numbers ever from the 2021-22 academic year.

The class of 2025 is made up of 8,303 freshmen, making it the largest class in University history. It brings the total number of enrolled students up to 56,299, the largest student population ever.

There was also a record number of in-state students admitted during this admissions cycle. The number of accepted international students was up from fall 2019 as well.

The rise in enrollment also saw a rise in test scores, as the average ACT for admitted freshmen was 31.4 up from 29.8 and the average SAT was 1410, up from 1331, according to a press release.

About 58% of students submitted test scores with their application. The University is expected to return to a test-mandatory admissions process for the fall 2022 semester.

Alongside undergraduate enrollment, the Graduate College also has a record-high number of new students with 20,567 graduate students, surpassing the previous year’s record of 17,866 students.

Almost 45% of all graduate student enrollment is through online programs, which have become increasingly popular in recent years, according to the press release.

Master’s programs now account for 66% of all graduate enrollment due to an increase in demand for graduate education nationwide.

“We are thrilled with the number of students who accepted their offer this year,” Director of Undergraduate Admissions Andy Borst said in a press release.

These records are expected to remain records for at least one year, however, as the Undergraduate Admissions office plans on reducing the target number for admitted students by approximately 600.