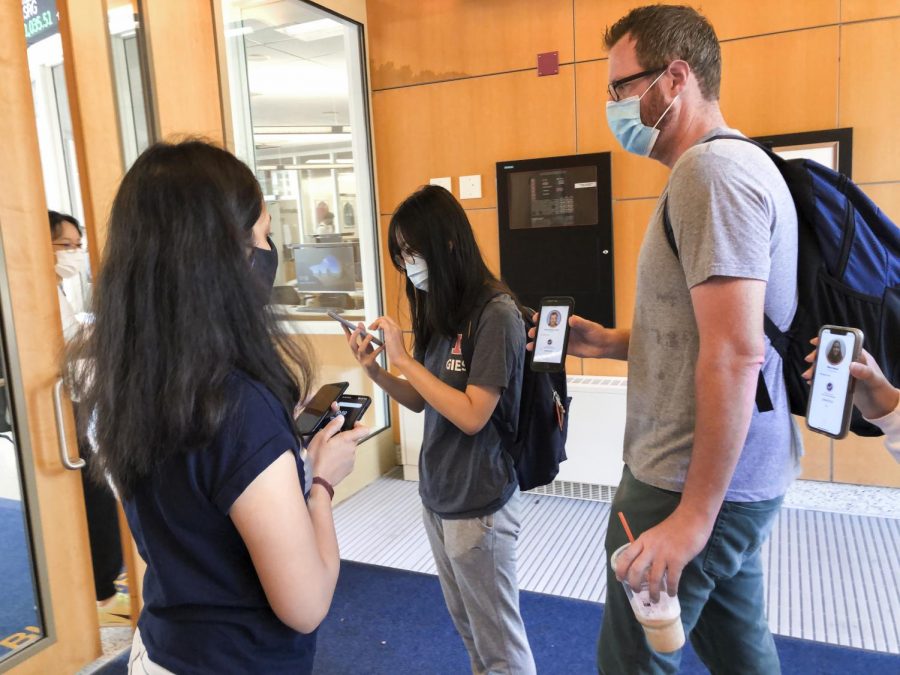 A University Wellness Associate checks two people into the Gies College of Business on Tuesday morning. The University has not hired enough Wellness Associates to be stationed at every building on campus, however, UI is still confident in their COVID-19 mitigation measures.

The University has not employed enough Wellness Support Associates to have one stationed at every campus facility entrance to check Safer Illinois applications. Instead, it is rotating through buildings with the approximately 330 WSAs that it does employ; the University does not have any current plan to increase that number and is investing in other mitigation measures instead.

“It would take a staff of about 3,000 WSAs to have someone at every entrance during all the hours buildings are open, and we have chosen to invest in a variety of layers of protection, instead of just this one component,” said Robin Kaler, associate chancellor of Public Affairs, in an email.

The University has implemented various measures to prevent the spread of COVID-19. One of those measures include mandating University-approved vaccinations for all individuals who are able and mandating compliance with a testing schedule every other day for those who aren’t vaccinated.

Youngkwang Lee, junior in ACES, checks Safer Illinois apps at the Oregon Computer Lab and the English Building throughout the week. Lee doesn’t have many cases of students he has to turn away now but did have to turn people away from entering the building in the beginning of the school year.

Despite knowing that not all buildings are being checked everyday, Lee still feels safe because of the additional measures the University is taking to stop the spread.

“I still believe that I feel pretty safe,” Lee said. “It’s been a couple weeks and there haven’t been any major issues.”

According to the SHIELD testing data, 121 new cases of COVID-19 have occurred in the past week, and the positivity rate for the virus has been on the decline since the initial spike as students returned to campus.

However, some students on campus are still worried about the holes in the system and were under the impression that all buildings would have a WSA checking apps.

“We were getting a lot of emails that said they were going to be doing that prior to the school year starting, and it’s only happened twice for me so far so that was kind of concerning,” said Dana Shuaibi, freshman in LAS. “I have had people who appear to be sick in my classes, and it could be because they’re not vaccinated.”

The University is confident in its mitigation system though, and is implementing measures to enforce the testing protocol even if there aren’t WSAs working at every building. Even if an unvaccinated individual didn’t get checked at the door, the University is still enforcing that they get a regular COVID-19 saliva test by an out-of-compliance notification.

“We monitor testing electronically whether someone attempts to enter a building or not,” Kaler said in an email. “So, students who aren’t vaccinated receive notification that they are out of compliance. Those who don’t test and get back in compliance face discipline – up to and including possible dismissal from the University.”