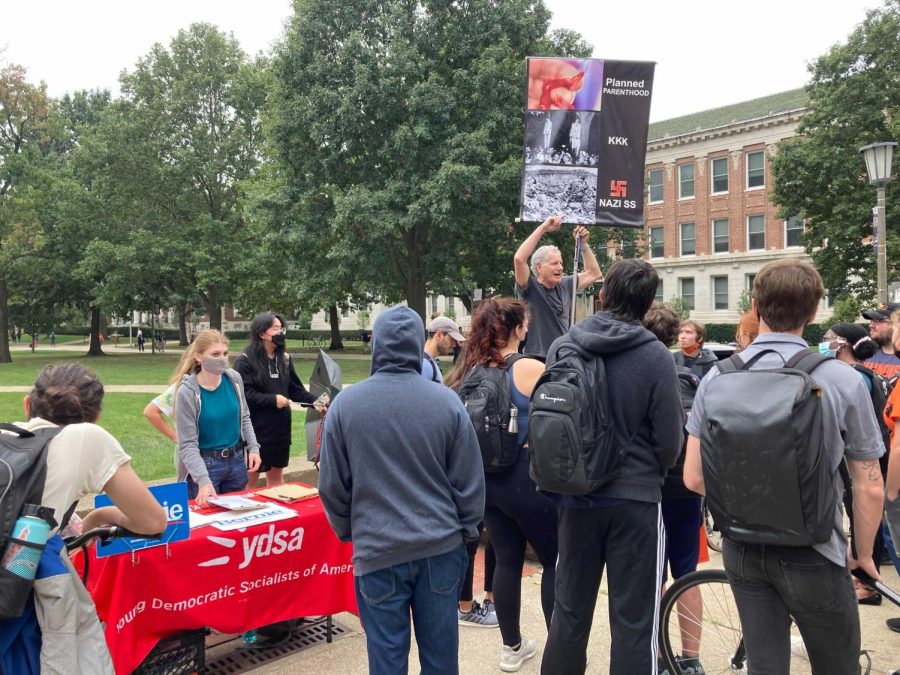 A man stands next to a democratic table holding a sign sharing that Planned Parenthood is killing humans like the Nazis or the KKK. Students debated against him saying that he should not compare the two.

On Wednesday morning, an anti-abortion demonstrator appeared on the Main Quad in front of the Illini Union. A crowd quickly assembled in response to his controversial sign, which compared Planned Parenthood to the Ku Klux Klan and Nazis.

Students in the crowd engaged with him in debate and student spectators also appeared to strongly disagree with his message.

“I was kind of baffled,” said Veronica Kuharchik, freshman in Engineering, commenting on the demonstrator’s sign, which she found perplexing. “There’s really no logic there, and people are trying to see the logic, but there is none.”

“You shouldn’t be comparing it to the KKK and the Holocaust,” Kuharchik said, when asked about Planned Parenthood.

“He’s rendered me speechless quite a few times in the worst way possible,” said Dan Purcell, freshman in Engineering. “He’s using the fact that he has three daughters and a wife to say that he is an expert on abortion.”

Jennifer Lee, freshman in Media, offered her view of the demonstrator’s reaction to student arguments.

“I’ve seen multiple people pull out their phones, searching up sources and everything, and saying ‘Hey, here’s a credible source who has this statistic’ and he’s like ‘Oh where did you get that from, Wikipedia?’ He’s downplaying all these sources that people are pulling up.”

“You’re not listening to anyone, and it’s unfair to have a conversation that’s only one sided,” Lee said, explaining her frustrations with the demonstrator.

Next to the demonstrator, the Young Democratic Socialists of America had set up a table advertising membership and asking students to sign a petition.

“We are circulating a petition trying to meet some common student demands across campus,” said Lexi Vogel, senior in Media. “We are also here trying to get other people to join our organization.”

When asked about the location of their table, Lexi replied it was in response to the protestor, who “really shamelessly decided to spout some hate and anti-abortion sentiment.” Vogel elaborated on the YDSA’s support of the right to abortion, even if the petition they were advertising that day was not directly tied to reproductive rights.

“We are trying to redirect some of the energy that has been brought here today to a good cause, in my opinion,” Vogel said. “We table regularly, he was here, so we decided to move our table closer.”

The petition in question lists a number of demands from the University administration. The newest demand, which is also the most notable, demands that the University place “absolutely no restrictions on student abilities to peacefully protest and assemble.”