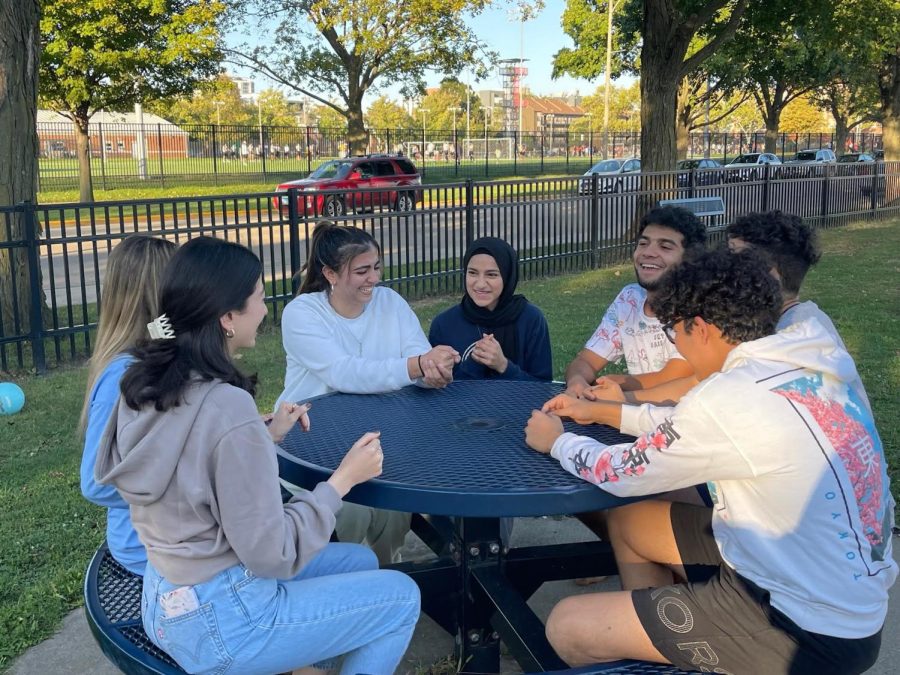 Students part of the MENA proposal sit around talking at a picnic bench on Oct. 12. Students work towards establishing a cultural house on campus for Middle Eastern North African cultures.

A group of students created a proposal for the establishment of a Middle Eastern Northern African cultural house for students and faculty.

Ayah Albareedi, senior in LAS and an executive board member for the Arab Student Association, believes that having a cultural house would allow MENA students to be seen.

“(A cultural house) plays into how many students have not been represented due to the lack of racial category,” Albareedi said.

A cultural house is different from a club or student organization because it’s a community where students and faculty can go to use as a safe space.

The idea to create a cultural house was especially encouraged last year. Creen Ahmed was in Students for Justice in Palestine and Illinois Student Government before she graduated last year, and she was one of the first to begin the formation of it. She reached out to students who were interested. From there, the group started working with the Illinois Student Government and reached out to the Arab Cultural Center at the University of Illinois in Chicago.

“We noticed that UIC was beginning their MENA campaign for the racial category, and so it occurred to us that we also have to be a part of this as well,” Albareedi said.

“People that are Middle Eastern and North African, are forced to categorize themselves officially as white,” said Dr. Lila Sharif, professor in LAS. “It positions people from that background within the same racial category of people that share very divergent histories.”

Sharif says that it’s difficult for students to be eligible as a minority to gain political representation that is usually offered to students of color.

Although the issue of MENA representation has been a problem in North America for over a decade, it has been an issue in other parts of the world for longer.

“A lot of critical scholars call this relationship one of Orientalism, where the West has always imagined the East as this backward place with backward people who are inconsistent with the ways of the modern European,” Sharif said. “And that representation was not accidental, it accompanied a lot of imperial and colonial projects that are ongoing in the Arab and Muslim worlds.”

For a racial category to be added, the University of Illinois system would have to agree.

“So we realize this is a much bigger issue than we had initially anticipated,” Albareedi said.

In years past, the cultural house continued to be pushed off, but now since the ISG has more funding, there is a possibility that they can invest in the project.

“We wanted to have an actual position where, once I graduate this year, another person is going to fill my role,” Albareedi said. We’re going to have close contact of the progress we made, and where they should continue for next year.”

The Arab Student Association and the Students for Justice in Palestine are in support of the cultural house. Buthaina Hattab, senior in LAS as well as a member of the executive board of SJP, has also been in direct contact with the administration to discuss this issue.

“(Hattab) wishes the admin would move quicker because this process of students graduating is always an issue,” Albareedi said. ”So going forward, we’re being timely with it, we’re not putting anything off, and we’re making sure all of our demands are being addressed as soon as possible.”

“We can hold cooking classes, we can have fast conversation tables, we can hold movie nights.” said Dr. Eman Saadah, associate professor in LAS.

In the summer, the house would continue to be used by The Summer Institute of the Languages of the Muslim World.

“During this summer program, which is eight weeks long, it is an intensive study of Arabic, Persian, Turkish and Swahili languages,” Saadah said.

Additionally, Albareedi stated that the University can have a bigger impact on representing MENA students.

“(A cultural house) is really intertwined with the racial political context of being racially categorized,” Albareedi said. “To support MENA students would be like supporting any movement that MENA students are spearheading. So, like political organizations that have been silenced in previous years. There are other cultural organizations that if they were better appreciated, students would feel a lot more supported.”

There are other cultural houses and student groups that have benefited from the University’s support.

“The campus recognizes (other cultural groups) and they support them so much that they’re even funding it to an extent,” Albareedi said. “So, that’s why we believe that MENA students deserve the same support as well and the same recognition. (A cultural house) would go more into having an established entity at the University.”