UI saliva-based testing expands beyond campus after Emergency Use Authorization 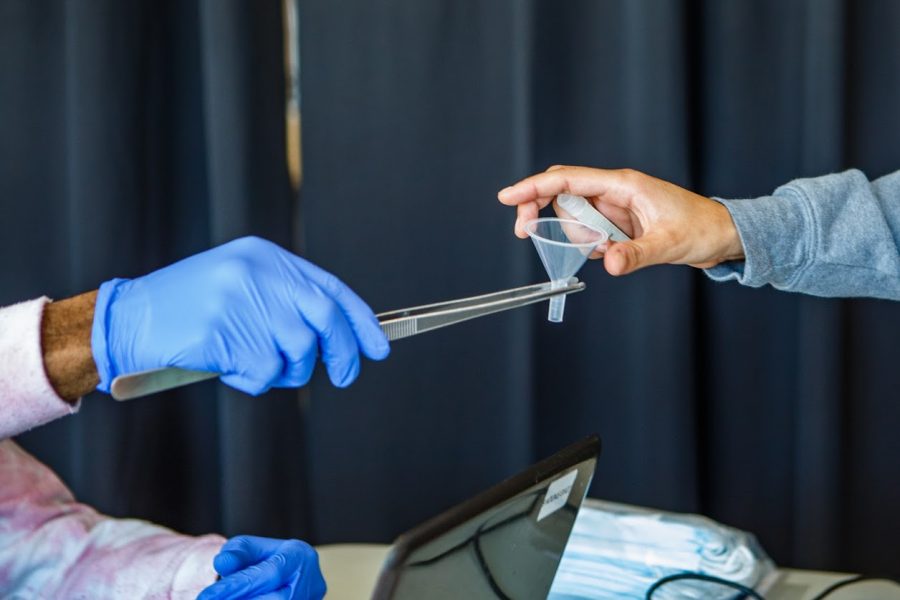 Illinois student Maximus Torres takes a University COVID-19 test at the ARC on Feb. 1. The test recently gained Emergency Use Authorization from the FDA.

As a result of the Emergency Use Authorization (EUA), the saliva-based test developed by the University to detect COVID-19 is now being used in locations beyond campus.
The test recently gained a EUA from the Food and Drug Administration. A letter of authorization was released for the EUA on Feb. 24.
When the test was first developed, it was used as a lab-developed test with its jurisdiction limited to the campus. The University was aware of the growing interest in the test and applied for approval on Dec. 30.
“Many were hesitant earlier, but are now excited to use and implement the test,” said Rebecca Lee Smith, associate professor in AHS, in reference to those who were skeptical about the test’s efficacy earlier.
This authorization is expected to allow for statewide use of this test.
“It’s always nice to see the things you believe in validated by an outside entity,” said Ben Taylor, spokesman for SHIELD Illinois. “We have believed in the accuracy and usefulness of this test since it was developed, and the FDA emergency use authorization shows that they agree with these claims.”
As far as in-state testing is concerned, 30 entities are being provided with testing right now. These entities consist of colleges and universities, school districts, companies and government entities.
More than 150,000 total tests have been processed outside of the University, and SHIELD is working on increasing that number rapidly to serve even more of the state.
“Shield T3 has already built a number of relationships with entities outside of Illinois and is testing at a fairly large scale,” Taylor said in regards to prospects for implementing the test out of state.
They are currently testing at the University of Wisconsin-Madison, Vanderbilt University, the University of Maine and a location in Washington, D.C. that serves multiple universities and Baltimore City Schools.
The test has multiple advantages over other tests, such as getting reports on the same day and costing less. SHIELD Illinois’ price is $20 per test for public entities and $30 for private universities and companies.
The EUA and the low cost of this test will potentially increase its distribution, both inside and outside the state.