Reception to be held for Illini 4000 team 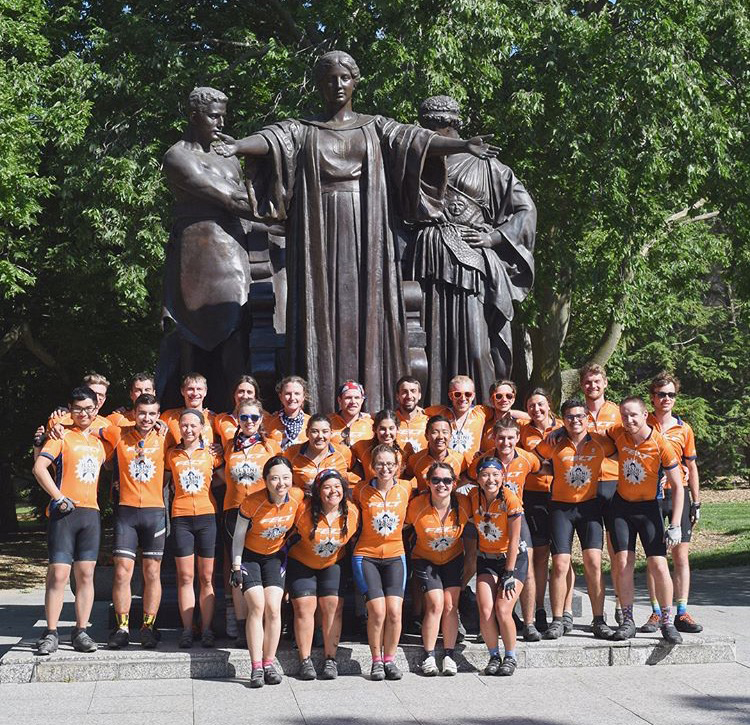 On Tuesday, June 5, the University will hold a reception at 3 p.m. to welcome the Illini 4000 team back to campus. Illini 4000 is non-profit organization dedicated to biking across the country in order to raise money for cancer research.

A reception will be held on June 5 at 3 p.m. at the south entrance of the Beckman Institute to welcome the Illini 4000 team to the University as they bike across the United States to raise awareness of cancer and fundraise for cancer research.

The Illini 4000 team began their 2018 trip in New York City on Friday and will end in San Francisco on August 2, said Margaret Browne Huntt, associate director of the Cancer Center at Illinois, in an email.

The reception provides the public with an opportunity to meet the team and cheer them on. The event is open to anyone, including those who have been affected by cancer. It will include multiple activities such as a short program, raffle and several outdoor events, Huntt said.

Catherine Schmid, recent graduate in LAS and vice president of the Illini 4000, said the reception will be held by the Cancer Center at Illinois.

“The Cancer Center has wanted to host a reception for the Illini 4000 to welcome us back to campus. We have been currently working on a partnership with the Cancer Center and so with that, we are looking to be more involved next year with campus efforts and kind of connecting the campus community at Illinois,” Schmid said.

In years past, there have been events while the Illini 4000 cycling team has passed through campus, but this is the first year where there will be a reception hosted by the Cancer Center at Illinois.

There will be multiple people attending, possibly some who are coming from the ride along. A ride along is where people can choose to cycle from different starting or endpoints with the Illini 4000 team instead of cycling with them through the whole trip from New York City to San Francisco, Schmid said.

University Chancellor Robert Jones, Jim Moore, Jr., president and CEO of the Universtiy of Illinois Foundation and Barry Benson, vice chancellor for advancement, are participating in the ride along with the Illini 4000 team.

“This is kind of the first year we have done a ride along because the University administration has wanted to do it and we would like to have them involved as well,” Schmid said.

Alia Alsikafi, junior in LAS and director of marketing of Illini 4000, said there will be an opportunity to collect interviews for the Portraits Project during the reception.

The Portraits Project is an opportunity for people who have been affected by cancer to share their story through informal interviews and at the end of the trip, Illini 4000 makes a documentary of everyone they have met along the way, Alsikafi said.

“(The Portraits Project) basically aims to document the cancer American experience across the country,” she said.

Since this is their first event with different organizations hosting and helping with it, people are excited to see how it will turn out, she said.

“There have been people on campus where we have our own little Illini 4000 picnic afterward, but never with a bigger organization on campus. It’s our first one; we are excited to see how it goes,” Alsikafi said.