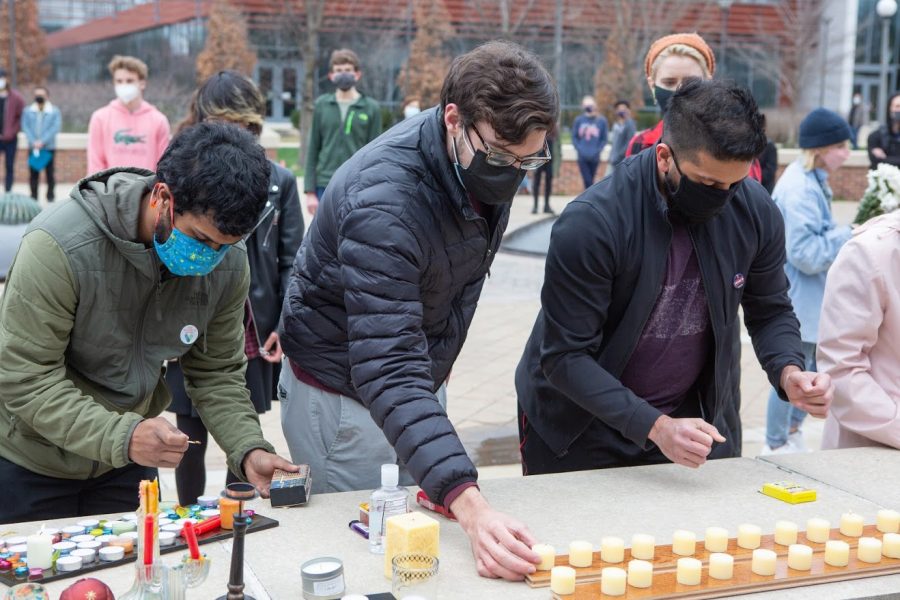 Students gather and light candles to commemorate the people whose lives were taken on Friday. Students of all different races gather to support each other.

With the recent shooting in Atlanta that occurred on March 16, an outcry arose regarding the rise in anti-Asian hate gaining attention throughout the country.
The Atlanta attack has launched protests against the rise of anti-Asian hate because the shooter specifically targeted Asian-run spas with the intent to kill and claimed the lives of six women of Asian descent.
The increasing hate crimes committed against Asian Americans have only heightened in the past year or so, and people are discussing how to address this issue on campus.
“People have become emboldened by racist rhetoric and use of ‘China virus’ or ‘Kung flu’ to refer to the COVID-19 pandemic; many people believe this has fueled anti-Asian prejudice and bias this past year, said David Chih, the director of the Asian American Cultural Center. “However, anti-Asian xenophobia and scapegoating certainly is not new.”
A summary released by the Stop Asian Americans and Pacific Islanders (AAPI) Hate group reported around 3,800 hate crimes from March 19, 2020 to Feb. 8. According to the report, there has been a surge in Asian American discrimination throughout the duration of the pandemic.
These numbers are just a small fraction of the racial discrimination people have gone through since the pandemic has started.
Asian American students on campus have had different experiences and reactions to these acts of discrimination.
“My initial response was just fear, not necessarily anger,” said Kathy Vo, the president of the Asian American Association chapter on campus. “That definitely came afterward, but I think my initial response was definitely fear, and I immediately texted my family members just to get a second reassurance that they were alright.”
A study conducted by the Center for the Study of Hate and Extremism has found that anti-Asian hate crimes have skyrocketed by 149% in 2020 due to the rise of negativity towards Asians once the pandemic began.
The attack in Atlanta in particular has amplified the issue of anti-Asian rhetoric in the country. Many people have highlighted how scared they are to go in public in fear of being harassed.
“I walk around and I still feel like I’m not a true citizen during quarantine times,” Vo said. “I was born here . . . down to my core, I’m American, but during quarantine, I walked up and down Green Street and I just feel like I’m being singled out,” Vo said.
In order to address this issue regarding anti-Asian hate within the Champaign-Urbana area, various groups have organized rallies and vigils to show solidarity for the Asian American and Pacific Islander community.
The #StopAsianHate Rally has been organized by the Champaign-Urbana chapter of Showing Up for Racial Justice to take place on Tuesday from 4:30 p.m. to 6:30 p.m. to address these issues in the community.
Matt Henshaw, co-organizer of the event, contacted SURJ in hopes of creating a rally to show support for the Asian community since he believes it’s an important topic the community needs to address.
“We plan to have a QR code people can scan to send them online resources that could help raise awareness on this issue that’s extremely important,” Henshaw said.
Taking accountability and addressing the overwhelming discrimination Asian Americans face has been the main focus for these events and campus members have a large part in this issue as well.
“I can just say this as a white person, I think we can’t dis-identify with the assailants,” said Roland Cusick, assistant professor in Engineering. “I think we need to take responsibility as a community for what leads to events like this.”
The response towards anti-Asian hate crimes has fostered many important conversations that are now being addressed in society and will continue to develop over the next few years, such as the rhetoric used when discussing the perpetrator.
“It’s infuriating that some have tried to humanize the killer, rather than the victims,” Chih said.  “Many people have told me that they believe that if the killer were non-white, there would not have been such a rush to humanize him.”