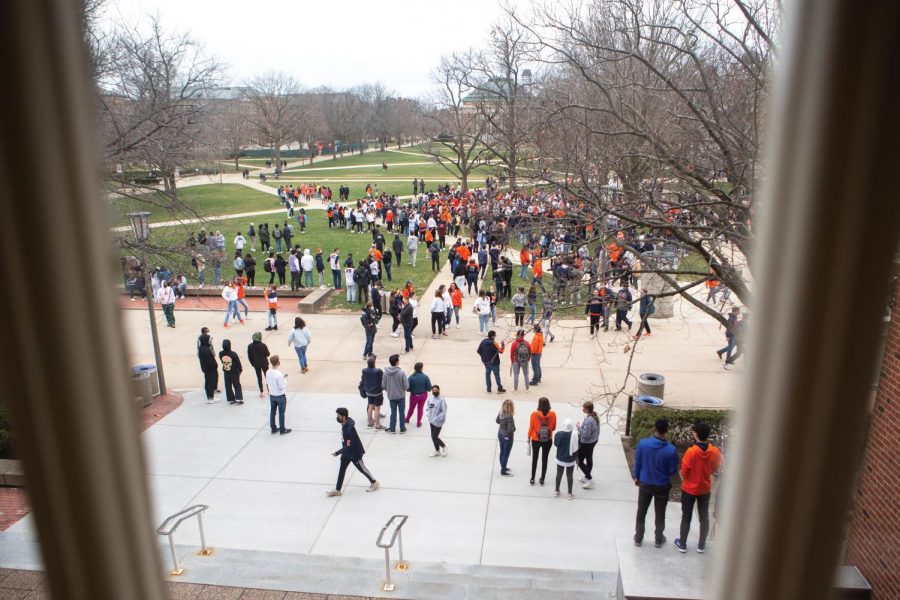 A crowd of students rushed the Main Quad after the Illinois men’s basketball team was named Big Ten champions on March 14. University students have been socializing more now that Champaign-Urbana has been lifting restrictions.

As the winter turns to spring, many students are now seeking new opportunities to break through the isolation of the past year.
The celebration of the Illinois men’s basketball team winning the Big Ten Championship is the most prominent example of this. Hundreds of students rushed the Main Quad and Green Street on March 14 during a celebration that lasted hours.
Campustown bartender Mitchell Thompsen has noticed a gradual increase in bar attendance as the spring semester has rolled on.
“Attendance has gone up over the last couple of months due to people getting vaccinated, and also due to the city lifting some of the capacity limits,” Thompsen said.
As more opportunities have become available for students to socialize, many are likely concerned about how to embrace these opportunities safely.
Dr. Rebecca Lee Smith, epidemiologist and associate professor in AHS, advised people to avoid large indoor gatherings and to practice certain precautions when attending outdoor gatherings.
“People attending large outdoor events should follow careful guidelines: plenty of distance, mandatory mask-wearing and self-quarantine until you’ve had two negative tests at least four days apart,” Smith said.
“I think for the most part, people do a good job (following COVID-19 protocol),” Thompsen said. “The start of the semester was hard because people weren’t used to it, but after going through it a couple of months, it’s become routine for people.”
According to the SHIELD COVID-19 dashboard, cases at the University have remained at the lowest level since winter break, as the rolling positivity rate has not risen above 0.15% during the entire month of March.
This decline is attributed to the measures taken by the community, the test-trace-isolate system used by SHIELD and the increased number of vaccinated citizens in the community, according to Smith.
Smith explained that keeping overall infections low makes it easier for contact tracers to curb the spread of the virus. Taking proper precautions keeps the virus contained in a “feedback loop.”
Rather than spreading out of control, the virus remains in predictable pockets that can be isolated easily by contract tracers.
“However, large outbreaks could happen if people relax their mask use and distancing too early, or if a large number of people bring infection after travel,” Smith said.
According to the Champaign-Urbana Public Health District, 48,013 residents of Champaign County have been fully vaccinated out of the 209,992 total in the county as of Saturday. According to Associate Vice Chancellor Lowa Mwilambwe, 3,151 vaccinations have been administered to the campus community by the McKinley Health Center since March 19.