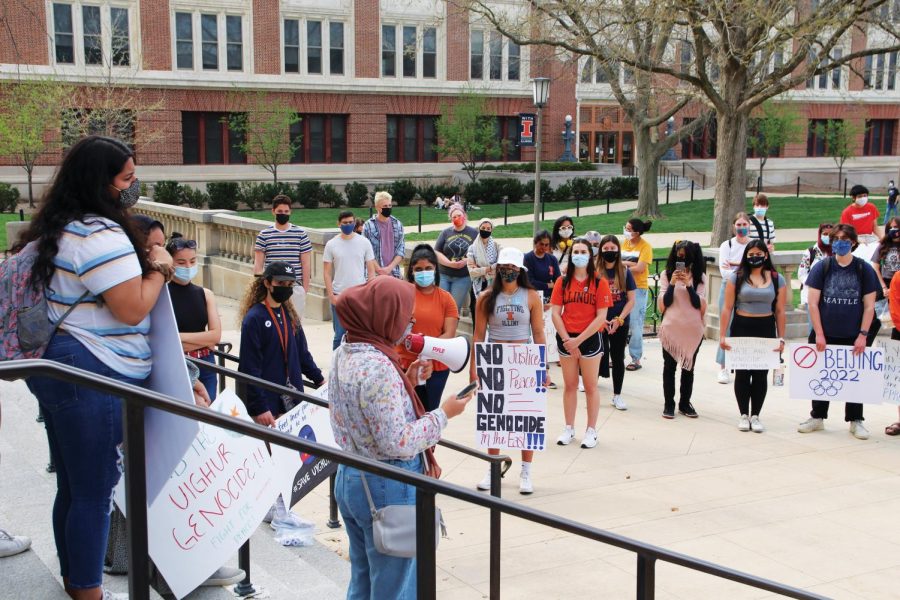 University students protest on the steps of Foellinger auditorium on Wednesday. Unite for Uighur UIUC organized the event to raise awareness for the Uighur Muslims and the abuse they’ve been facing.

Last Wednesday, the Unite for Uighur UIUC student initiative organized a protest to raise awareness against the abuse of Uighur Muslims.
This systemic oppression has been flagged by several human rights organizations and many have referred to it as a “genocide,” according to BBC. The Chinese government has been accused of forcing the Uighur people into internment camps.
The protest started at the Foellinger Auditorium and ended at the Central Illinois Mosque & Islamic Center. There were speeches made throughout the march by members of a variety of RSOs.
Some of the organizations that were involved in the protest were the Muslim Student Organization, Students for Justice for Palestine, Arab Student Association, Black Student Association, Pakistani Student Organization and the Underrepresented Muslims and Minority Advocates.
Aliyah Mohiuddin, junior in Business, was one of the speakers at the protest. She spoke about the hardships that millions of Uighur Muslims have endured because of their culture and religion.
“Since 2014, millions of Uighurs have been placed in internment camps,” Mohiuddin said.  “This includes mass sterilization of women, birth rates dropping, physical and mental torture on the daily; all for the goal of the eradication of the Uighur culture and their way of life.”
Mohiuddin encouraged spreading the word about this conflict because this is an issue that is not being talked about enough by the mainstream media.
Yousef Ahmad, junior in Engineering, is part of this initiative against the oppression of the Uighurs. He mentioned that the goal of the protest was to raise awareness on this issue, to educate the students on campus about the abuse against the Uighurs and to raise money for the cause.
According to the statement by Unite for Uighur UIUC, the initiative raised $789 for the Campaign for Uyghurs, a non-governmental organization with the goal of raising global awareness on this issue.
Ahmad stated that the turnout at the protest was a little more than what he expected, which was a good sign. He said that he is proud of the progress that the initiative has made; however, there is still a lot more that needs to be done to raise awareness about this issue.
Anthony Erlinger, junior in LAS, was one of the participants at the protest. He said that he found out about the oppression of the Uighur people through social media and heard about the protest through a friend.
“The speeches were very well done, everybody seemed very into it and it was very well organized,” Erlinger said.
Unlike previous large protests on campus, this protest did not have a police presence. According to Ahmad, the University offered some type of police presence for the protest; however, the organizers of the event did not want any police presence at the event, thus they declined the offer.
According to a statement by Unite for Uighur UIUC, “We must actively educate ourselves on what is happening, donate to organizations allocating resources to Uighurs suffering and advocate for suffering.”