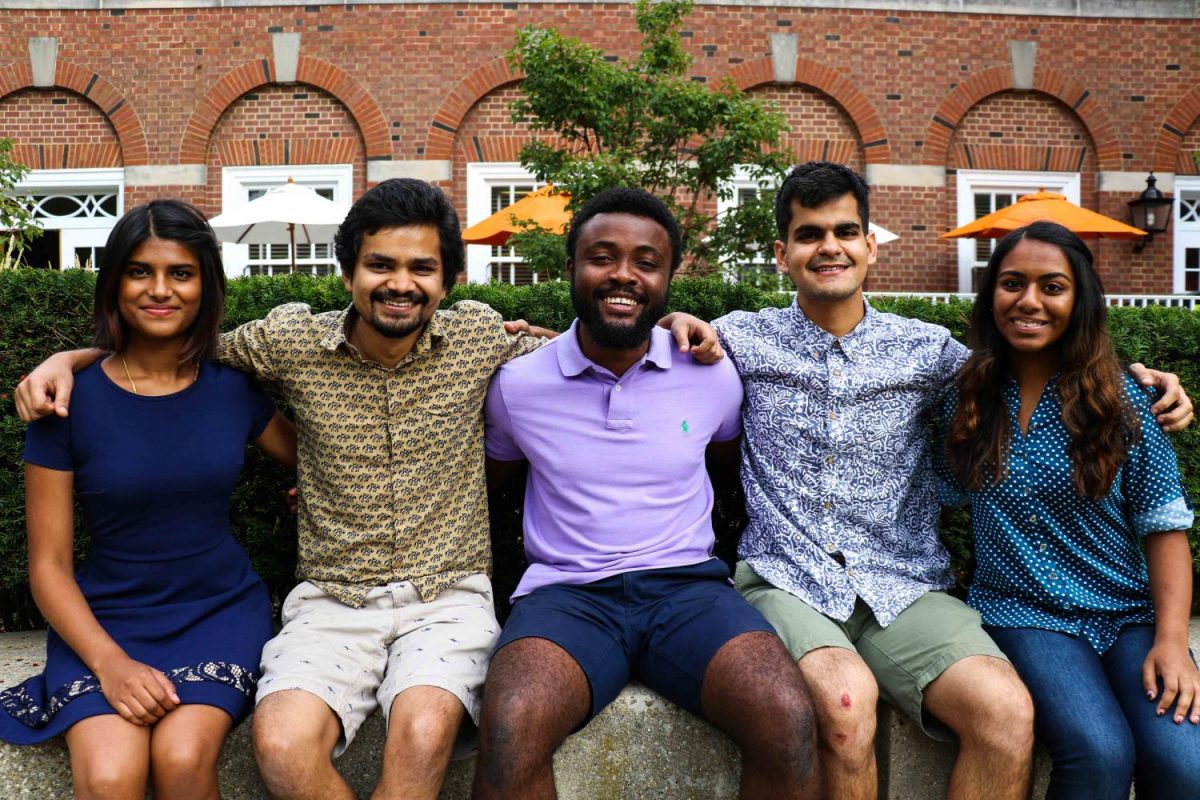 Portrait of the Theia Vision team.

A team of five students came together to develop what will be known as Theia Vision: glasses to help the visually impaired be aware of their surroundings.

These special glasses are embedded with a camera that will communicate with a visually impaired person’s smartphone. The glasses then process in real time so the visually impaired can engage in the environment effectively, according to Karan Chawla, team member and graduate student in Engineering.

“I got the idea when I was interning in San Francisco this summer. I was at a bar, and I was talking to this blind person sitting right next to me. He was just (talking about) how different our life experiences are,” Chawla said.

Chawla said he wanted to incorporate real time object detection, which is when the camera in the glasses would recognize objects in real time.

The name for the project comes from the Greek goddess, Theia.

“Theia actually means sight, so since our project is designed to help those with visual impairment, we wanted to come up with a name that would reflect what we are aiming to do,” Sejal Parmar, team member and freshman in Engineering, said.

The team released a survey on Reddit asking for feedback on their idea. They said they got a lot of responses about the difficulties of navigating random obstacles that come into play that visually impaired people cannot anticipate, such as the difficulties of crossing streets with unpredictable cars.

“(The visually impaired) are interested in how they look . . . how other people look,” Austin Daniel, team member and graduate student in Business, said. “(They are) interested in other people’s body language and facial expressions when they speak.”

The team came together at 54, a three-day event held at Siebel Center where students can learn about running a start-up, after team members and graduate students Chawla and Rishabh Doshi discussed the idea over the summer.

“At this moment, we have basically figured out the basic business plan and the phases behind what we need (and) will implement in the future,” Rittika Adhikari, team member and freshman in Engineering, said. “We have a plan as to how we’re gonna implement our first phase which is our navigational portion.”

It will take about six or seven months to work out the algorithm for the glasses, then the product will go into testing phase.

The team also plans to make the voice produced by the glasses a more human voice to give the users a normal feel when using the product.

“I feel like this project has a decent chance of success mostly because of our team right now and the diverse skill sets that are present here, so I am optimistic for the future of Theia Vision,” Parmar said.

The team said they hope to help with all obstacles of the visually impaired, not just navigating the world.