Although the University’s College of Engineering has been traditionally male dominated, the gender discrepancy has been significantly narrowed in recent years.

The College of Engineering student body was 15 percent women about 10 years ago, but the number has grown to 20 percent now, said Bill Bell, executive director of marketing and communications of the college.

Devin Oliver, junior in Business, created a visual representation of data regarding gender discrepancies in different colleges and majors at the University.

“There’s so much information; I think it’s really interesting information as well,” Oliver said. “You would expect the engineering majors will be quite male dominated, but I kind of wanted to see over the years, has it gotten better?”

Oliver said a lot of what he’s seen is consistency over the last few years.

“You see progress; it’s slow progress, as in maybe it goes from having 8 percent female in a major to maybe 15 (percent),” he said. “So that’s progress, but it’s a slow road to getting to that more equal gender diversity.”

There has been a lot of improvement in gender diversity within the college, Bell said.

However, the last two freshman classes in the college were 25 percent women, he said.

“We’ve seen a real acceleration in the number of women in the freshman class,” he said. “That’s a really promising sign for it, certainly. Some work left to do, but we’re making progress and making (it) relatively quickly at this point.”

According to Bell, the Computer Science department and the Bioengineering department both have 45 percent women in their freshman classes.

Sarah Habib, sophomore in Engineering, said that although she often finds herself to be the only girl in a discussion section, the overall experience of being a female engineering student at the University has been positive.

“There are a lot more females in my major than I was expecting, even though it’s still not as many as guys,” she said. “It’s nice seeing other girls, I guess; it’s just that simple.”

Habib said she has had a couple of female professors in her engineering classes, and it is an encouraging sign to see.

“I’ve heard a lot of horror stories about women in academia, specifically,” she said. “What people like to say is that it’s like a leaky pipe; that girls are dropping out of the path to becoming a professor or some other high-end job every step of the way, so it’s definitely encouraging to see people who have made it through all of those obstacles.” 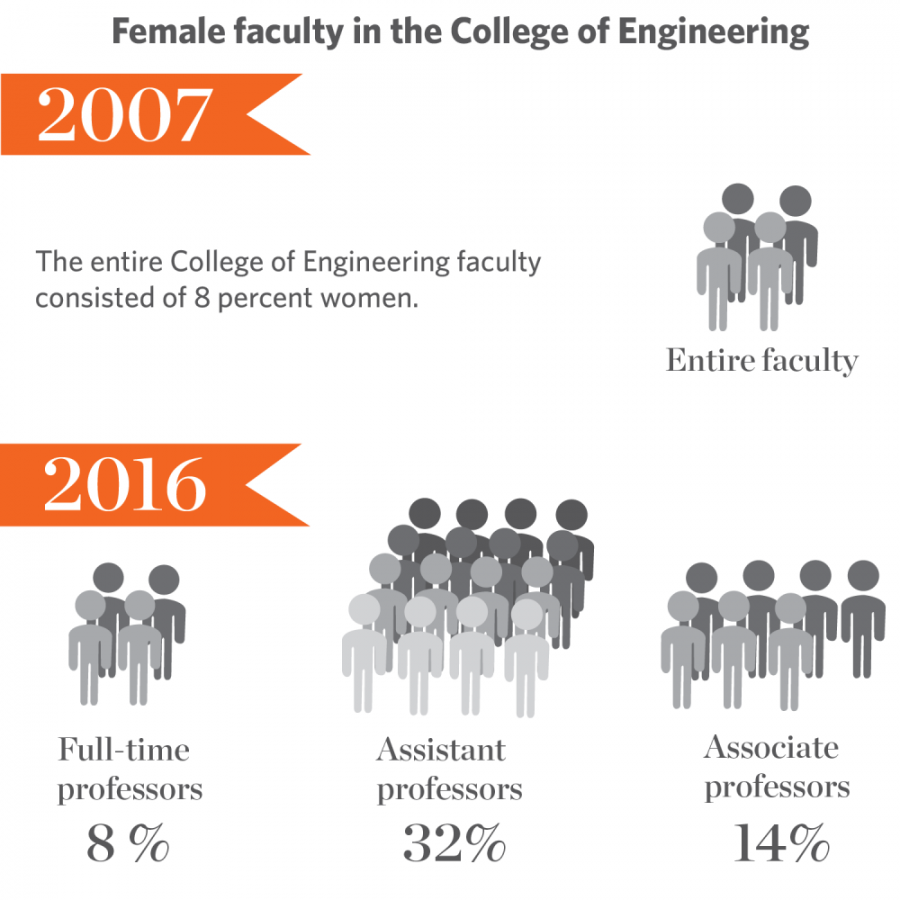 Angela Wolters, director of Women in Engineering, wrote in an email that the decision by women to begin and continue to study engineering is often limited by a variety of factors, including personal and societal expectations, awareness of opportunities and role models, quality of academic preparation and availability of encouragement.

“The under-representation of women in engineering is found not only at the college level but also in industry, management and academia,” Wolters wrote. “The Women in Engineering program, along with the College of Engineering and specific departments in the College, works to provide equal access and experiences for all students to study engineering.”

Bell said it is important to remember the great impact the women engineers from Illinois, and from all over the country, are driving for great research and great improvements to our lives.

“That diversity is driving those improvements and helping make them have as great an impact as possible to as many people out in the world as possible, and so we value that 100 percent,” he said.

Bell said the college is trying to improve not only the numbers, but also the experience.

Oliver said it is interesting to see how gender norms and gender roles play out in the classroom and in the communities.

“Having a balance of genders within the classroom really helps to bring out perspective, because we do walk this earth differently as of today, because people are treated differently based on their genders,” Oliver said. “Just having all people represented in classrooms is a really important thing, and when we see more gender-diverse classrooms, it makes us better students.”