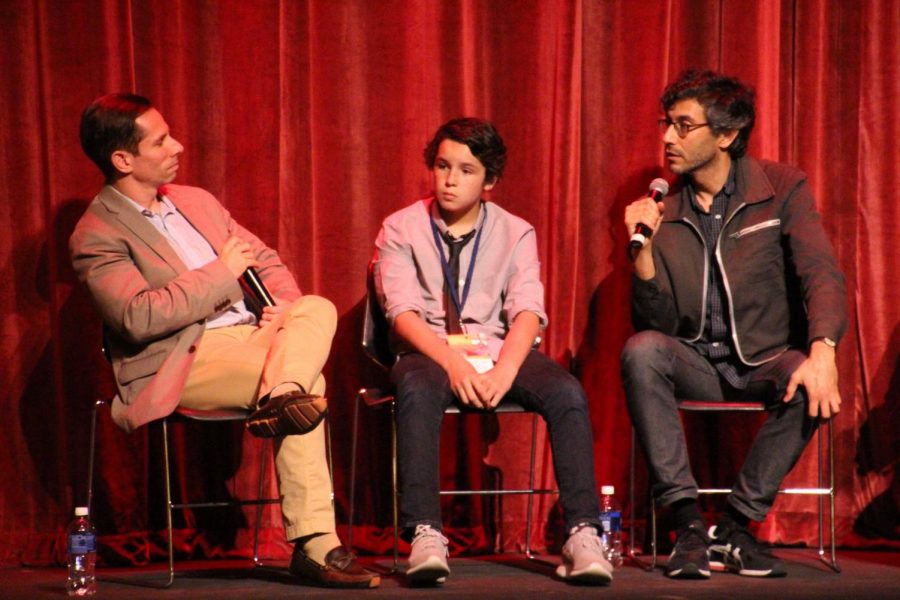 Rain Baharani, director and co-writer of 99 Homes, and Noah Lomax, actor in 99 Homes, answer questions during the Q and A section of the screening of 99 Homes at The Virginia Theater on April 18, 2014.

Passes to the 20th Annual Roger Ebert Film Festival, known as Ebertfest, will go on sale today at 10 a.m.

The festival was created by University alumnus Roger Ebert, an Urbana native, former Daily Illini editor-in-chief and Pulitzer Prize-winning film critic who passed away in 2013. Chaz Ebert, Roger’s widow, is co-founder and executive producer of the festival.

Nate Kohn, director of Ebertfest, said this is going to be the biggest festival ever.

“It’s our 20th anniversary, and that really means a lot to us,” Kohn said. “So we’re gonna go all-out to make this extra special.”

Passes to the festival will cover all the screenings during the five-day event taking place from April 18 to April 22 at the Virginia Theater in Champaign.

The passes cost $150 for all five days, or $100 for students. A total of one thousand passes can be purchased through the festival website, theater website or at the theater box office. Tickets for individual movie screenings will be available starting April 2.

Kohn said they can only sell a thousand passes for the festival and when they are gone, no more are made or sold.

The festival is intended to feature cinematic works that are often overlooked by audiences and critics. The lineup of films, guests and other festival events will be announced several weeks beforehand.

“We don’t announce the films or guests until later in the year, but I can say, though, this is our 20th anniversary; we’ll have some surprises for our festival-goers, some very special, interesting guests,” said Kohn.

The University Archives has also acquired the motion picture press kit files used by Ebert when he served as film critic for the Chicago Sun-Times, according to a press release. The University Archives and the Communications Library have already started working together to create a complete index of all of the thousands of reviews Ebert wrote.

“This is an important story for the University to have,” said University Archivist William Maher in a press release. “What Roger learned here, how he honed his craft, got critical experience and gained confidence — all of that carried him forward. It propelled him. The University gave him that platform at the same time that he changed the University himself.”

According to a press release, other universities have approached the Sun-Times for the materials, but Chaz Ebert wanted to see the materials come to the University, Ebert’s alma mater.

The festival is sponsored by the University’s College of Media.

“The College of Media is proud to have played a role in acquiring these materials for the University of Illinois,” said Wojtek Chodzko-Zajko, interim dean of the College of Media, in the News Release. “Roger loved this place; he established his film festival and the Ebert Center here, visited often and introduced us to Chaz, who has become a valued member of our media family. Roger’s enduring legacy is safe in her hands and with the University of Illinois Archives.”

Kohn said people come for all over the world to Champaign-Urbana for the festival.

“It’s become one of the largest and most important calendar events in Champaign-Urbana,” Kohn said. “We will continue to make it a can’t-miss event.”