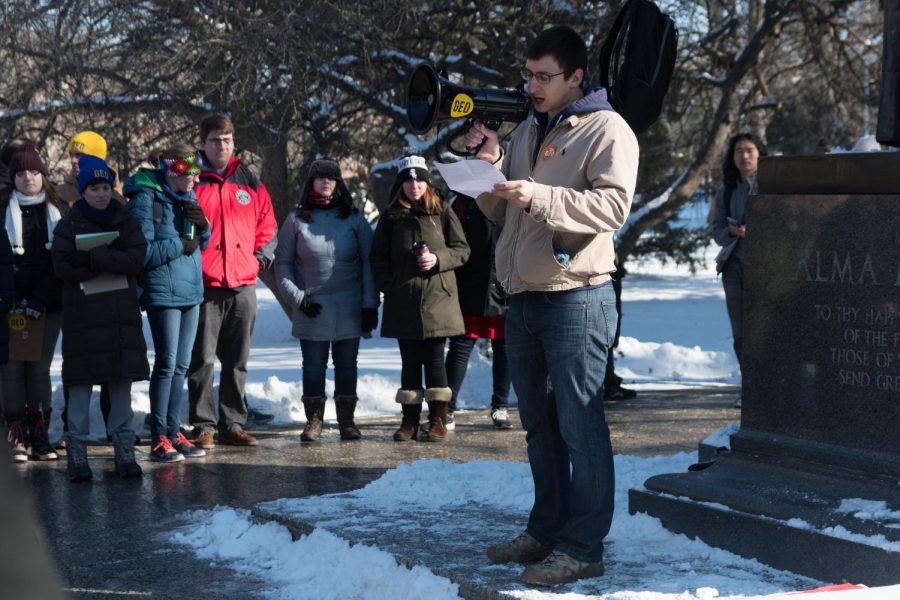 Graduate employees protest at the Alma Mater for a fair contract on Jan 18. The Graduate Employees’ Organization announced this morning that it will begin striking Feb. 26 if an agreement with University administration is not reached beforehand.

In response to the administration’s plan to withhold tuition waivers for graduate employees, the Graduate Employees’ Organization announced this morning that it will begin its strike on Feb. 26.

An emergency rally was called by the organization Wednesday night when the University changed the language in its statement regarding tuition waivers, noting that waivers would be available, but optional.

Gus Wood, co-president of GEO and Ph.D. student in LAS, said the change of language was like a slap in the face.

“It is so discouraging at this time because we thought we were making progress,” Wood said.

The termination of the waiver will force graduate employees to pay to keep their jobs. As the administration refused to bargain in terms of the tuition waivers with the GEO, it deemed the move “unilateral” in its press release.

Wood noted the GEO was clear about its intent to strike during the last bargaining session with administration.

“We told them directly to their face we will strike on (Feb. 26) if we do not settle a contract,” Wood said.

Robin Kaler, associate chancellor for public affairs, said in an email the University will continue the bargain in good faith to work toward an agreement with the GEO.

“At a university of this size, we are always preparing for possible disruptions, but we remain hopeful that we can continue working through the mediation process to achieve an agreement and avoid a work stoppage,” Kaler said.

The strike was chosen at a far-off date because the organization wanted to give the administration enough time to reconsider and to come back to the bargaining table, Wood said.

“(The administration is) clearly trying to bust our union,” Wood said. “If they get their language in the contract, it will destroy the union and the education at the University of Illinois.”

Wood said the GEO needs the support of undergraduate students to push back against administration and to reach a fair contract.

“The undergraduates have to understand that what the administration is doing will hurt us,” Wood said. “The stakes of this are higher than they have ever been for GEO on this campus.”