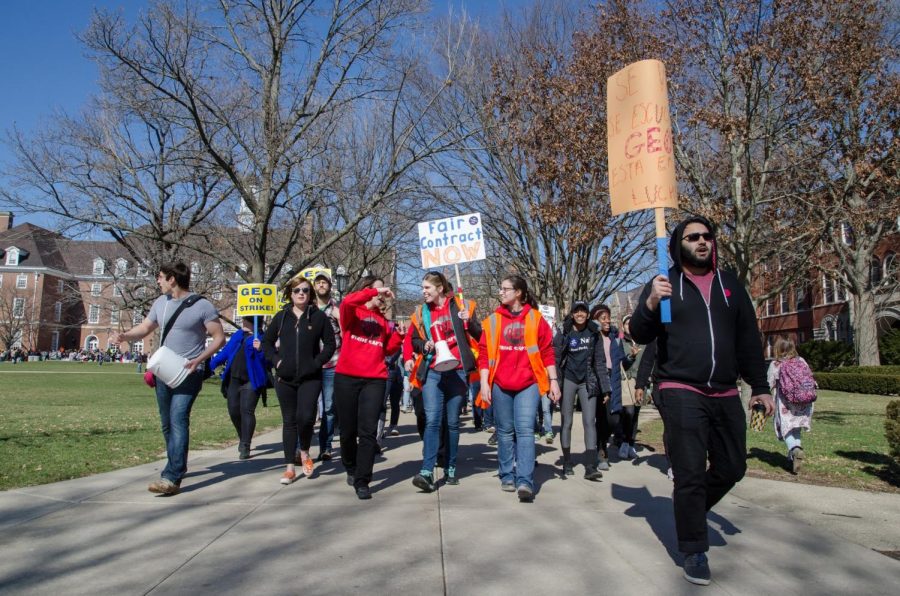 GEO members protesting on the Main Quad during the first day of their strike on Monday.

The Graduate Employees’ Organization strike is continuing into the end of this week, according to a press release from the GEO.

On Wednesday, nearly 1,000 people rallied in front of Foellinger Auditorium. Protesters also made their way to the North Quad and to the I-Hotel and Conference Center, where they disrupted the Agriculture Technology Innovation Summit.

“We wanted to show the administration that we are here, we walked out and we will not go back in until they give us a fair contract,” said Matej Penciak, sixth-year Ph.D. student in mathematics.

Despite Thursday morning’s weather, GEO members and supporters still turned out at a rally at the Beckman Institute on the North Quad.

“We thought the rain would turn people off,” said Bruce Kovanen, graduate student in English and bargaining team member. “The number of people that has been showing up is really impressive.”

Kovanen said the length of the strike is up to the provost, and the bargaining team has been waiting for his call.

“He hasn’t called despite his statement to media that he is ready to bargain,” Kovanen said. “He needs to prove it. Pick up the phone. If he doesn’t call us, he better wait for a long strike.”

Robin Kaler, university spokeswoman, released a statement Friday morning. “The University, since then (Sunday’s bargaining session), also informed the federal mediator of its willingness to resume negotiations.  According to the mediator, the GEO has not expressed a willingness to return to the bargaining table.

“Since the GEO announced its intention to strike, the GEO has made no attempt to contact the University to resume negotiations,” Kaler added.

GEO members are looking to keep their tuition waivers and are seeking health care and higher wages.

“Some of our members heard about some people complaining about the noise, but we want our strike to be visible,” said Marilia Correa, fifth-year Ph.D. student in history.

This year’s GEO strike, made up of teaching assistants and graduate assistants, is said to be the longest since 2009.

“Everything has been very peaceful and people are very energetic,” Correa said.

Dora Cohen, teaching assistant and GEO member, said she hopes the strike will be over soon, but she hopes she’s doing the right thing.

“I’m committed to participate in the strike as far as it goes,” Cohen said.