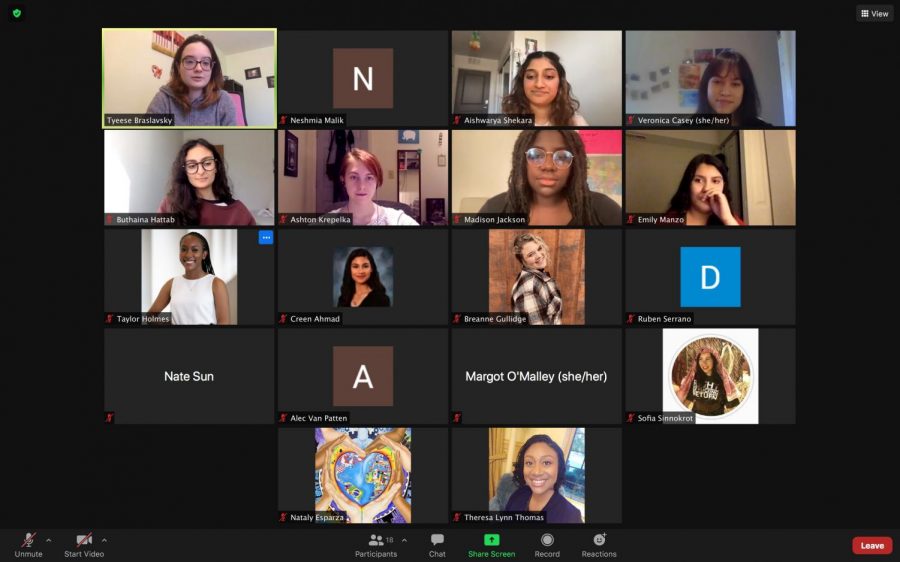 A screenshot is taken during the University’s Student Advocacy Coalition zoom meeting to recognize women in leadership roles. During Women’s History Month, the RSO has been discussing the topic of intersectionality.

While Women’s History Month is being commemorated around the world by educating society on the vital role of women in history, an organization on campus used their platform to feature the stories of female students on campus in leadership roles and later held a panel showcasing those very stories.

The University’s Student Advocacy Coalition, a bipartisan student organization on campus that dedicates itself to advocating for higher education, student rights and policy changes, held a panel over Zoom this past Friday to recognize women in leadership roles, while also discussing the multifacetedness to being a female leader in society.

Many of the panelists emphasized while simply being a woman has its consequences, intersectionality introduces an added identity crisis that minorities struggle with, affecting how these women are represented in society.

Veronica Casey, president of Students for Environmental Concerns, described social movements as intersectional. While she is an advocate for environmentalism, during Women’s History month, she is highlighting women leaders in different realms of environmentalism, connecting female empowerment to protecting the environment.

“I think recognizing that social movements are intersectional is so important and actively trying to educate people on how different movements connect,” Casey said.

This past month SECS has dedicated its efforts to exhibiting women’s leadership roles in regards to environmentalism.

“As an ally who’s leading an organization that focuses on the issues of undocumented students, I recognize my privilege in this space and want to use my voice to uplift the needs that I see are important on campus,” Manzo said.

The resolution called on UIUC to divest from corporations that engage in human rights abuses including Israeli war crimes in Palestine. While working on bringing justice to the Palestinian people, Hattab felt it was necessary to call on other human rights violations such as ones committed by police on this campus and organizations that support Immigration and Customs Enforcement (ICE) in detaining immigrants.

Hattab connected the intersectionality of being a woman of color and facing the struggles of racism and classism to the generalized mindset that many white women assume feminism as being. Hattab understands there is more depth to feminism than just women’s rights.

“I think some White women are very quick to isolate struggles and think feminism is just women, and that it is not anti-capitalist or anti-racist,” Hattab said.

Madison Jackson, Black Students for Justice organizer and Direction of Government Relations of ISG, made a similar point that the experiences of minority women in professional settings are far from being simple.

“If you are a woman of color, you are more likely to have seen these microaggressions or experienced them yourself. It’s important to be strong and use your own intersectionality to stand up for the issues that apply to everyone,” Jackson said

Women’s history month continues to take place until the end of March, followed by sexual assault awareness month in April.