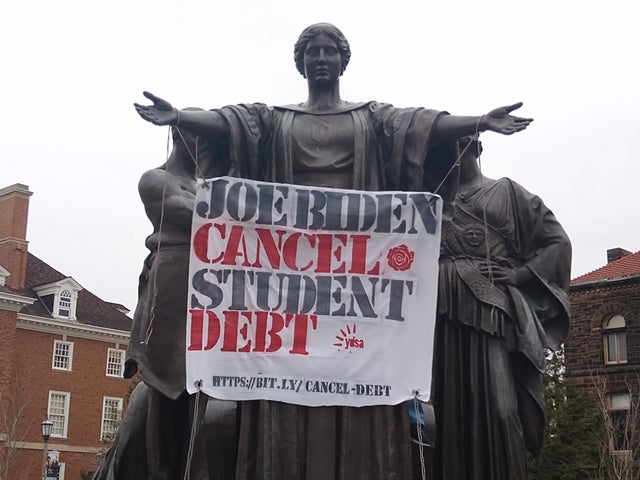 A sign made by the Young Democratic Socialists of America hangs from Alma Mater. The RSO is focused on holding president Biden accountable on his promise to relieve student debt.

A passersby on Saturday walking near Alma Mater saw her adorned with a banner stating “JOE BIDEN CANCEL STUDENT DEBT.”
The banner was put together by the University’s chapter of the Young Democratic Socialists of America as part of a larger nationwide banner drop platform. Chapters across the nation draped similar banners as a part of a national effort for student debt forgiveness.
“We have many chapters from the east coast to the west, and obviously the midwest, and we are all trying to get this message out there,” said Dat Luu, president of the University chapter of YDSA.
Each banner had a link to the YDSA petition listed underneath calling for President Biden to cancel all student debts through executive action.
“Sign our petition for Joe Biden to forgive ALL student debt via executive order in the first 100 days of his presidency. Join us in this fight!” the petition states.
As of Tuesday, the petition had gathered 8,339 signatures out of the goal of 12,800 signatures.
Luu stresses that banner drops and petitions are not the final results desired by YDSA.
“It’s all about building pressure, building that momentum for real change to be implemented in government,” Luu said. “Banner drops and petitions help, but at the end of the day themselves, they are only good for raising awareness.”
According to the Federal Reserve, around 43% of all adults ages 18-29 who attended college have some form of student debt, while 60% of people aged 18-29 with a bachelor’s degree have some form of student debt. The average amount of debt that each person holds is around $20,000 to $24,999.
Across the nation, many calls have been made for student debt forgiveness, mainly from progressive and socialist-affiliated candidates and organizations. A key proponent of this movement was Sen. Bernie Sanders, an influential figure that attracted many due to his calls for Medicare for All, complete elimination of student debt and other similar policies.