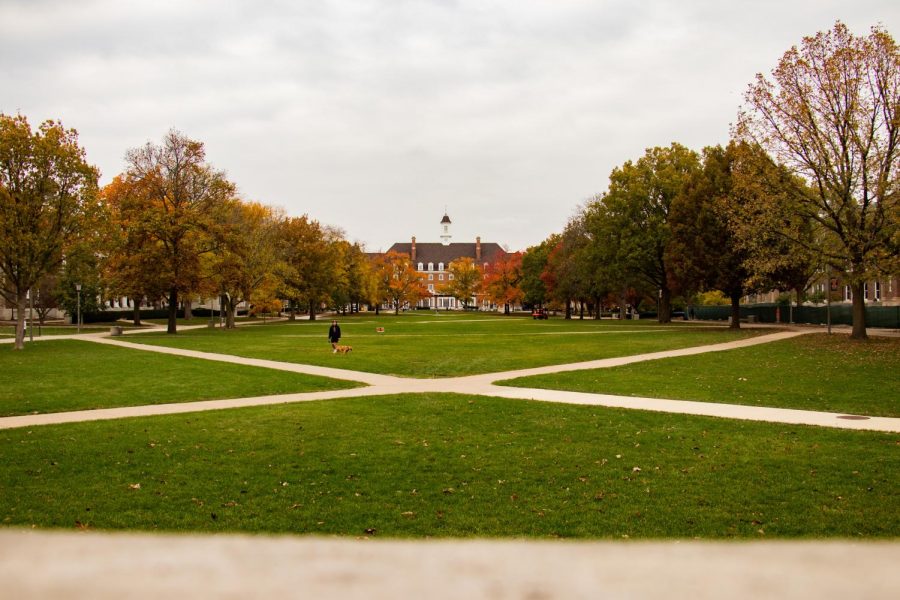 A student sits alone on the Main Quad at the University of Illinois on Oct. 29. Students have been dissatisfied with the lack of a spring break and claim it has led to increased worries with their mental health.

Students have been dissatisfied with the non-instructional days as a compensation for canceling spring break, citing mental health concerns. In response to this, some instructors have decided to give a week off to their students.
Spring break was canceled this year because of COVID-19. Students are getting a few non-instruction days instead which are scheduled during the middle of the week throughout the semester. These changes were recommended by the University’s SHIELD team as the risk of infection could increase with people traveling during Spring break.
The University officially changed the start of the semester to Jan. 25 instead of Jan. 19. The three non-instructional days that were added to the calendar were Wednesday, Feb. 17, Wednesday, March 24 and Tuesday, April 13.
Teaching assistant professor Graham Carl Evans gave his students a week long break for his course CS 225: Data Structures.
“I got an email from the professor saying that that many students were burnt out, and hence they decided to not have any lectures for this week,” said Jared Frank, sophomore in Engineering and CS 225 student.
Frank added that the course would have a bigger project due later, condensed with more course content to make up for the week off.
“It’s a great time to recoup and catch up with things that were left behind earlier and get a breather,” Frank said. “It definitely is not the same however, since you still have classes or midterms the next day. It feels more like catching up with work, instead of taking a break from work.”
Frank added that he was thankful for the professor being mindful about students, especially with the current semester being all the more overwhelming due to being online.
Laurie Johnson, professor in LAS, also gave her students a week off for her course GER 251: Grimm’s Fairy Tales in Context.
“I completely agree with the University’s decision to not have a break,” Johnson said. “It was the right call to make, given the public health issue that we are facing.”
Having taught this course many times, Johnson had a week off integrated in the course schedule before classes were moved to an online format.
“I moved the week off earlier, since I did not want to inadvertently encourage spring break traveling,” said Johnson. “Through this, the students definitely had more time for other things and were thankful for the same.”
This has raised concerns recently since the online coursework has added to the anxiety of students as they struggle to take care of their mental health while coping with deadlines and their course load during these times.