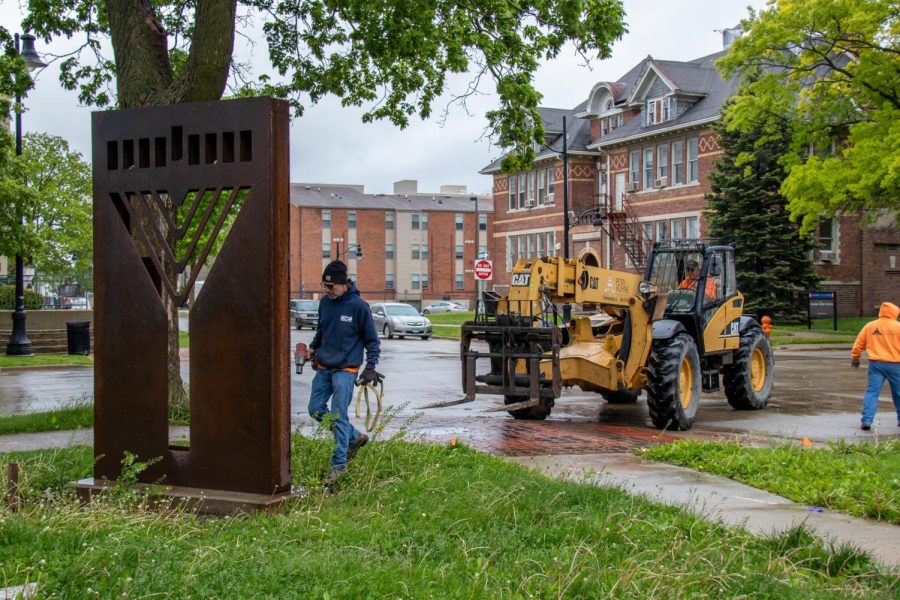 Workers start unscrewing the iconic Chabad monument on Sunday. The monument was moved to the new Chabad house.

By Amrita Bhattacharyya, Interim Editor-in-Chief
May 11, 2021

The Chabad Center for Jewish Life officially marked its transition to its new location with the moving of the menorah Sunday.

Around 15 people attended the initial event of removing the menorah on the lawn at the old location.

The Illini Chabad has been slowly moving things over from the original location at 509 S. Fourth St. to the new location at 209 E. Armory Ave., which was previously a fraternity house.

This will be the University’s first Jewish-affiliated housing option, opening to students in the fall.

“The Illini Chabad is a great place for the Jewish community and we had a lot of good memories in this building,” said Joey Levitan, sophomore in Business and attendee.

“We had a menorah at our old center for many years, ” said Rabbi Dovid Tiechtel, director of Illini Chabad. “Unfortunately, it was vandalized too many times. And then a few years ago we built this two-ton menorah of steel.”

According to Samuel Moscovitch, freshman in Engineering and head intern at Illini Chabad, 11 leases have already been signed at the new Chabad Center for Jewish Life, with around five leases being non-Jewish residents.

“Rabbi wanted to keep it close to home and wanted Jewish kids to know that this is a place to live,” Moscovitch said. “But we’re also open and welcome to having everyone on campus so we already have a few non-Jewish leases that have come in.”

Moscovitch said that renovations to the Chabad Center for Jewish Life will continue over the summer, with additions such as study lounged and a kitchen. The renovations will cost around 3 quarters of one million dollars, according to Moscovitch.

“A lot of students will be able to live here, and be able to thrive here, be able to do their schoolwork, which will be really amazing,” Moscovitch said.

Tiechtel said that Illini Chabad began using the newly purchased location right away due to COVID-19 and needing increased space for events.

“Moving the menorah (Sunday) officially represented moving out of the old and moving into the new,” Tiechtel said.