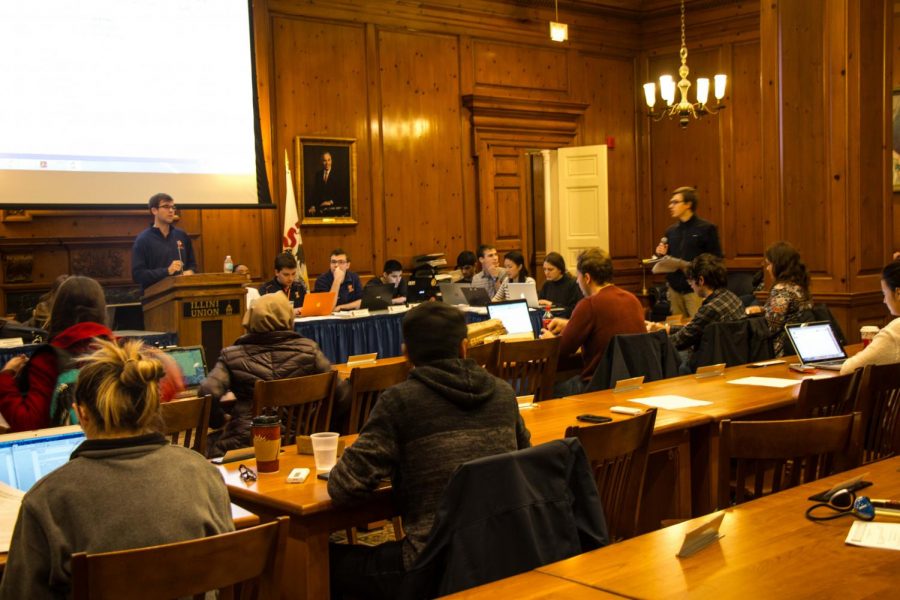 The Illinois Student Government meeting at the Pine Lounge in the Illini Union on Nov. 15, 2017. ISG executive members said they are working on completing initiatives brought up in the semester, including a sexual assault prevention task force.

With only a few weeks left in the semester, the Illinois Student Government is looking to continue to advance progress made on initiatives throughout the past school year.

Joey Domanski, vice president of ISG and senior in LAS, said he believes they are exactly where the executive board planned to be at this point in their term.

“One of the things I really enjoyed was passing a new logo. It is a new face for the student government,” Domanski said. “At the end of the day we are here for the students. We are not here for us.”

Domanski wants to improve student involvement with ISG. He wants to be able to walk up to a group of students, ask their major and ask who represents them in the Illinois Student Government.

Chief of Staff Spencer Haydary, senior in LAS, will be graduating in December and wants to train the next chief of staff in the last few weeks of the semester.

“You have a lot of people who are very passionate about the issues that they ran on and they are making sure that gets addressed, so we’ve done a lot of cool things so far,” Haydary said.

Haydary said he would have liked to improve the environment of the ISG assembly during his time in ISG, adding there have been controversial topics brought up during the meetings which has subsequently caused a more tense environment.

“After public comment and everything, people are laughing and people are being much more open,” Haydary said. “(I would have made) sure bullying would not be tolerated. I think we have gotten to the point where we’ve all been comfortable in our positions and everyone knows how to interact with each other now.”

ISG President Raneem Shamseldin, senior in Business, said she’s proud of the DACA resolution for students on campus and the changes being made involving Chief Illiniwek.

Shamseldin said she emailed the Big Ten Network after they displayed Chief Illiniwek during a football game. The network apologized and will be removing all merchandise with Chief Illiniwek.

“Of course, there might be things that I would change, but at the end of the day it is more about moving forward and making better decisions coming forward,” Shamseldin said.

Shamseldin hopes to get the sexual assault prevention department running. She said they have all the members together and they are working on things such as an anti-sexual assault campaign video.

“We can try and please everyone. We can try and do what the administration wants us to say, but I think we represent the students and we are a decision-making body and we do make decisions — sometimes that don’t satisfy everyone — and we need to stick by our decisions,” Haydary said. “We need to be willing and able to stand up for something.”