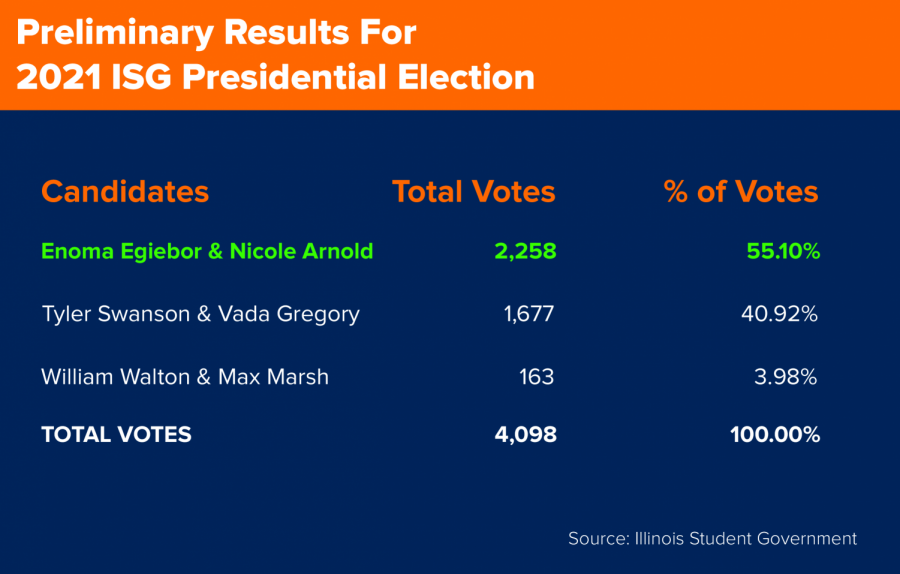 After a month of unconventional campaigning because of the pandemic, the certified results for the campus student elections this spring were finally released on Monday by the Campus Student Election Commission.
According to the results, Enoma Egiebor and Nicole Arnold won the election for Illinois Student Government president and vice president with 55.10% of the vote, defeating Tyler Swanson and Vada Gregory (40.92%), and William Walton and Max Marsh (3.98%).
“It was long and hard fought, and it definitely was a great run for us,” said Arnold, ISG vice president-elect.
Additionally, Mariama Mwilambwe, sophomore in LAS, won the election for student trustee with 40.73% of the vote, defeating Alexis Perezchica, junior in LAS and current ISG president (35.7%); Adrian Wong, graduate student (14.43%); and Justin Huff (9.15%), junior in ACES.
Egiebor and Arnold, both sophomores in LAS, are “gearing up” for the ISG transition set to occur on April 21 and are seeking staff to fill their presidential cabinet. Additionally, they have been reaching out to different RSOs in order to gauge student needs.
“We really just want to hit the ground running and make sure we have our ducks all in a row before we get into office on April 21,” Egiebor said.
Furthermore, Egiebor and Arnold have been working with Asian student organizations such as the Asian American Cultural Center in an effort to combat anti-Asian discrimination, such as hosting workshops that teach how to respond when witnessing anti-Asian discrimination.
Egiebor and Arnold also hope that with a return to normalcy, the University will be more willing to increase funding for the cultural houses on campus, which have been struggling financially due to cuts in student campus fees.
“With the student fees, the Cultural Houses were one of the first budgets to get cut, and it’s really disheartening to see and really upsetting,” Arnold said. “I really do hope that once everything goes back to normal, they’ll be getting those fees back.”
Swanson, junior in ACES who ran alongside Gregory against Egiebor and Arnold, hopes that the culture of ISG changes, which he currently sees as “very cliquey” and  “doesn’t feel inclusive.”
“There’s a lot of gatekeeping; there’s a lot of trying to be perfect all the time, and then that leads to people being left out or only certain people getting into the organization,” Swanson said. “I think overall it makes for a worse student government. So I hope Enoma and Nicole are able to recognize that.”
Swanson said that he and Gregory mainly worked with newer ISG members and campus groups that were not traditionally involved with ISG.
“We knew that we were underdogs in a way,” he said. “And we just weren’t able to put everything and get a victory in the end.”
Swanson also thinks that it is important for ISG “to be constructive rather than combative” when working with the University administration.
“I think the administration really does see the value of student government and want to be helpful,” Swanson said. “But we need to come to them with a plan to work together, not a plan to work against one another.”
Mwilambwe, who was elected student trustee, said that her immediate plans involve talking to various RSOs and student groups on campus in order to understand their goals for the coming year.
Mwilambwe also plans to contact University administrators and campus resource centers such as the Counseling Center to better understand the procedures the University has in place.
“I’m trying to get insight into not just how the system works in general, but how it’s worked for various stakeholders around campus, and how they believe it can be improved and how I can support them in that,” Mwilambwe said.
Mwilambwe noted that all the candidates who ran for student trustee this election represent “a different base on campus” and are all involved with different campus communities. As a result, she hopes to connect with them in the future to “learn more about their perspectives.”
Wong, who ran for student trustee against Mwilambwe, hopes that the elected students will be cognizant of “the broader needs and the broader traditionalities” of all communities and groups on campus.
“I really hope that they will think beyond undergraduate needs alone,” Wong said. “And that they’ll think about graduate faculty, staff, clerical workers, food and building service workers and residents.”
Wong would also like the elected students to give “at least considerate weight” to the needs of these groups and “create opportunities and spaces” for them to discuss mutual needs.
During the election, ISG fielded two referendum questions. One called for reallocating 25% of the University of Illinois Police Department’s budget toward “resources for students, workers and community members” and passed with 78.08% of the vote. The other called for the creation of a University department to assist undocumented students and passed with 83.31% of the vote.
Wong noted that he was “really happy” with the results of the ISG referendum questions.
“I hope that the administration will consider the organized efforts and desires of their student body,” Wong said. “And I hope for any measure that the student body brings to administration, that they’ll take it seriously.”
Like Wong, Egiebor and Arnold were also glad that the UIPD referendum passed. Arnold did not expect “such a great turnout” for the referendum and noted that she “saw a lot of backlash right off the bat.”
“I just hope, as a Black student myself, that the University actually listens to us and tries to remedy some of our concerns,” Egiebor said. “Because it’s just a lot and can be painful at times to even talk about. We just want to be heard.”