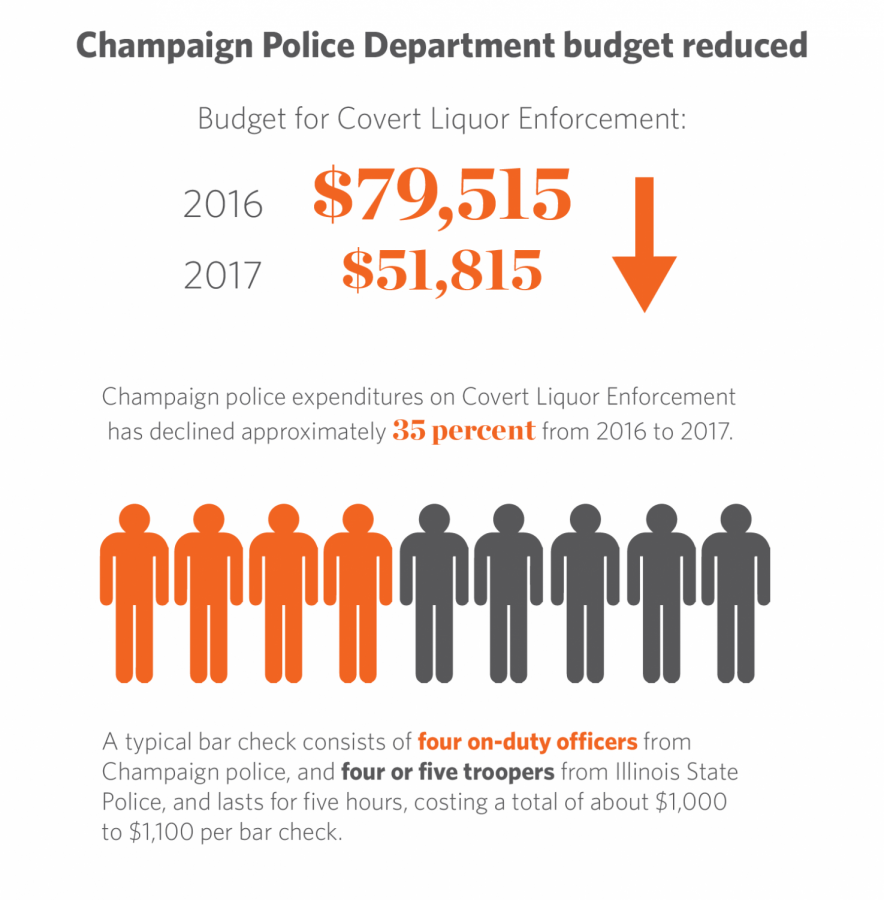 Illinois State Police, with the assistance of the Champaign Police Department, sent out a press release detailing over 20 citations issued at bars across campus for underage drinking violations on one night last month.

While it seems that  “bar raids” — or procedural bar checks — are on the rise, that is not the case, said Champaign Police Sergeant Joe Ketchem. They are actually declining due to budgeting issues in recent years.

Champaign police expenditures on Covert Liquor Enforcement has declined approximately 35 percent from 2016 to 2017.

“We used to conduct about 12 bar checks a year. This year, we are down to five or seven,” Ketchum said. “That does not mean we have not done three (bar checks) in a row or three weekends in a row.”

A typical bar check consists of four on-duty officers from Champaign police, and four or five troopers from Illinois State Police, lasting for five hours and costing a total of about $1,000 to $1,100 per bar check, according to Ketchum.

An underage drinking citation costs $350 and increases every two years. For bars, the fine for serving alcohol to someone under the age of 21 is $500 and increases each time a bar is ticketed.

When bar managers are informed that a bar check is going to occur, they cooperate, said Luke Henry, general manager of Joe’s Brewery.

“We work with the police because they are doing their job, trying to ensure safety and a safe environment,” Henry said. He added both the police and Joe’s Brewery have this goal in mind.

Henry has been the general manager of Joe’s Brewery for 10 years. As of January this year, Joe’s Brewery began using tactics to deter underage drinking, such as using wristbands for customers rather than stamps, which are less easy to fabricate.

Since Joe’s Brewery has a high turnover rate — those who work there do not stay for long — Henry said it is important to make sure new employees are aware of the rules regarding drink service, which is why they require specific classes and training for all employees, in addition to those required by the City of Champaign.

When Champaign police conducts bar checks, they are not random, Ketchum said.

“We are usually looking to see if there’s a football game in town. Our two biggest problems of the year are Moms Weekend and Dads Weekend. We see a lot of moms and dads who are not compliant with the law and will buy drinks for their kids,” he said.

Parents seem to be trying to relive their glory days, Ketchum said, and they are not aware that the laws that apply elsewhere still apply here.

Champaign police also try to conduct more bar checks towards the beginning of the year rather than later, since that is typically when freshmen first arrive on campus and are out exploring the college scene, Ketchum said.

Since August of this year, five bar checks have been conducted with two more to go, Ketchum said.