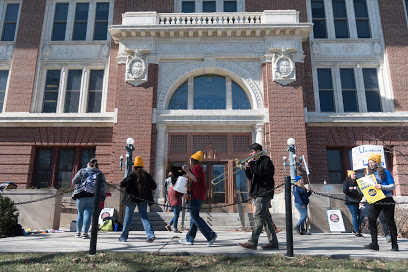 The Graduate Employees’ Organization strike that began Monday is putting students in a difficult situation, as they cross picket lines to attend classes that are not canceled.

According to Robin Kaler, University spokeswoman, 27 classes were canceled and 66 classes were relocated to buildings that are not being picketed.

Derrick Spires, assistant professor in LAS, who moved his class to a different location, said he supports the graduate students and their right to strike.

“It is a really important feature of labor,” Spires said. “Their requests are not being honored.”

Spires’ class typically meets in the English Building, which is one of the locations being picketed. He moved his class to Wohlers Hall until the strike is over because he did not want to put his students in a situation which they have to cross picket lines if they feel uncomfortable doing so.

Andreas Cangellaris, vice chancellor for academic affairs and provost, said in a Massmail to undergraduate students that although picketers are not allowed to “create a disturbance or block entrances or exits,” they have the right to talk to students who pass picket lines.

“As a student, you have a right to attend the classes for which you pay tuition,” Cangellaris said.

However, not all professors are moving their classes, despite the building being picketed. This leaves undergraduate students with no choice but to either skip the class or to enter picketed buildings.

Neha Chandani, freshman in the DGS, said she would not feel comfortable passing through a picket line. She has yet to come across a situation like this, as her classes in picketed buildings got canceled.

“I understand why they’re picketing, and I think they’re picketing for a good reason,” Chandani said. “Everybody has the right to their opinion and for whatever reason, they may not choose to support. I just do.”

Clint Moon, freshman in LAS, is not so lucky. Moon had to pass GEO members who were protesting on his way to a class in Foellinger Auditorium. He said he felt uncomfortable and guilty because it seemed as if he was going against the GEO even though he agrees with what they are fighting for.

Most, if not all, of his teachers are graduate students, some of whom he really respects.

“I think that it’s fair to students (who) still want to attend class, but it’s also an act of ignoring an issue and essentially glancing over it,” Moon said.

Cierra Humphrey, second-year graduate student in LAS, said she is passionate about the strike.

“I have some medical issues, and the health care that we receive isn’t currently adequate,” Humphrey said. “I recently got married. We’re trying to start a family. That’s not really something that is a possibility for many of us.”

Humphrey said fair wages and good health care are both human and worker rights. She said she encourages undergraduates to think about what would happen if the teacher’s assistants and graduate assistants who teach their classes stopped working completely.

She added it is disappointing when some professors don’t move or cancel their classes in respect of the picket lines.

“What we would hope is that people who have the privilege of having a faculty position would stand in solidarity with us,” Humphrey said.