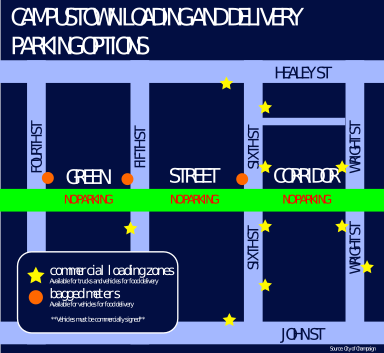 A little over a month ago, temporary barricades appeared along the center lane of Green Street, in an effort to end the increase in illegal parking in Champaign. Now, public officials indicate that more permanent solutions will be implemented in order to prevent center lane parking.
While the issue of illegal parking on Green Street is nothing new, the increase in delivery orders prompted by the pandemic increased the frequency of center-lane parking, according to Kris Koester, information officer for public works at the City of Champaign.
“We’ve seen more delivery activities happening, and instead of using the side streets where there’s loading zones, they would just leave their vehicles in the middle of Green Street,” Koester said.
This increase in center-lane parking is not only dangerous because the Green Street center lane’s primary function is strictly for emergency vehicles in heavy traffic, but it’s also dangerous for drivers and pedestrians, according to Koester.
“We’ve witnessed near-pedestrian vehicle accidents, as someone has tried to take off from the center turn lane and not seen a person walking in front of them,” Koester said. “We had one delivery vehicle parked in the center turn lane who opened their driver side door just as a plow was coming through to plow snow off the street.”
Alongside the physical lane closure, Champaign also expanded the options for delivery drivers to park on side streets.
“We went ahead and designated some individual parking spots as food delivery pickup spots so that smaller vehicles could use those metered spots,” Koester said.
This is to leave loading zone areas open for larger delivery vehicles.
Ömer Ece, sophomore in LAS who works as a delivery driver for DoorDash, commented on the importance of Green Street to his work.
“Green Street is really useful because it’s right by the apartments and frats or wherever I need to deliver to,” Ece said.
The new center lane closure, however, creates an additional delay in a job where time is literally money.
“I don’t want to do delivery on Green, because it takes up a lot of time to try and find a place to park and then wait,” Ece said. “It increases a lot of walking distance to park and then go to the restaurant.”
While Green Street is still a valuable place for deliveries, Ece says that the center lane closure makes it more difficult to run deliveries there compared to other locations around town.
With regard to the more permanent plan for lane closure, Koester said that Champaign intends to introduce “stick delineators” to replace the barricades. A small round tube affixed to the ground of the center lane, the delineator will be easier for emergency vehicles to bypass them while also deterring nonessential vehicles from parking in the area.
These delineators will also be labeled so that they will more clearly “define what that center lane is used for,” Koester said.