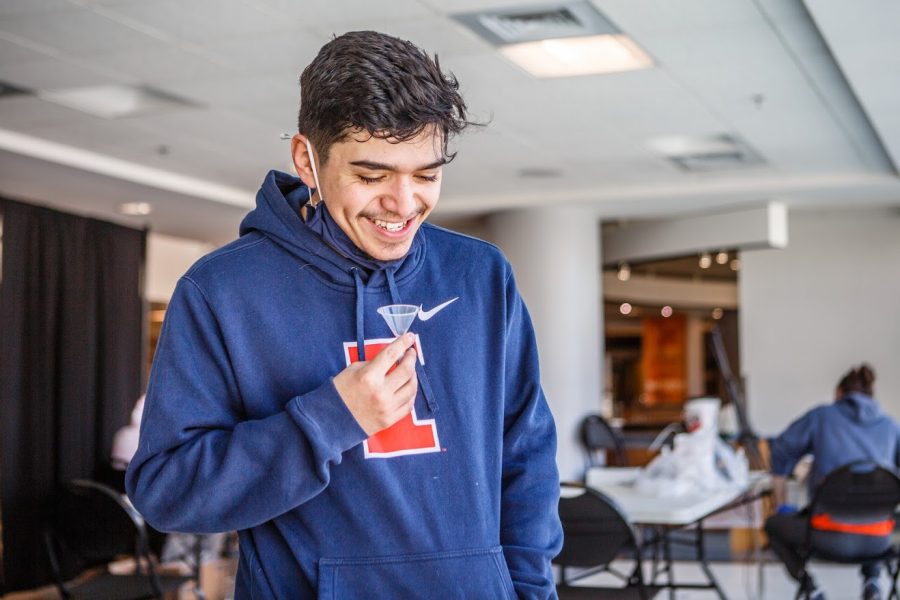 Jose Hernandez spits into his saliva sample tube in order to detect if he has COVID-19 on Feb. 1. The University of Illinois has been working on upgrading the saliva test to include family members.

The University has announced the offering of saliva-based COVID-19 testing to families of the University and schools in the C-U area under the new SHIELD CU program, expanding testing beyond just the University.
Originally, testing was slated for rollout last Friday, according to University staff and the SHIELD CU website. However, a bug “preventing family members with Android devices from being able to enroll in the program” has now caused the program to be delayed until a later date, according to a Massmail sent out Friday.
According to a Massmail sent out on March 23, “all household and family members of faculty, staff and students who are eight years old or older are eligible” for the test.
The initiative is co-sponsored by the University of Illinois and OSF HealthCare, with the University providing the expertise behind the testing procedure and OSF HealthCare providing after-test care and information to those who test positive, according to the program’s website.
A central component of the initiative is the rollout of the Safer Community app, an application built upon the same Rokwire platform that the current Illinois and Safer Illinois apps are built on.
“Rokwire is this open source system that we released which would allow anyone to build an app for their community, and we are using our campus as a testbed to explore various services that could be put into the app,” said William Sullivan, professor and director of the Smart Healthy Community Initiative. “The Illinois app and Safer Illinois app are part of this platform.”
People enrolled in the Safer Community program who are eligible due to University family status will have to link their Safer Community app to the UIN of a University-affiliated sponsor. After entering this information, sponsors have to authorize the Safer Community account as a linked account before they can get tested.
State Farm Center is currently the only testing site available for SHIELD CU members. Additionally, only “select lines designated for SHIELD CU” may be used, according to the Massmail. A list of testing locations and times can be found on the SHIELD CU website.
Once tests are processed, results will be displayed on the Safer Community app in a similar manner to the current Safer Illinois app. Schools which will receive the pilot program of SHIELD CU include Urbana High School and Stratton Academy of the Arts.
For University family members, each SHIELD test will cost $10. However, students and faculty that attend schools enrolled in the pilot program will be able to test for free under a Rockefeller Foundation grant covering testing expenses for them until June, according to Neal Cohen, professor and Director of the Interdisciplinary Health Sciences Institute at the University.
A big question for the SHIELD CU program is equity issues in schools, according to Sullivan.
“Who’s got access to a cell phone, a smartphone, these are all issues we have to consider,” Sullivan said.
Equity issues and privacy issues stemming from the handling of data from minors means that schools will not be using Safer Community, Sullivan said. Instead, schools will obtain test results from the SHIELD CU program and will directly
notify students of test results, including potential infection status.
Currently, there are future plans to expand the program “to one or two schools in Rantoul as well,” Sullivan said.