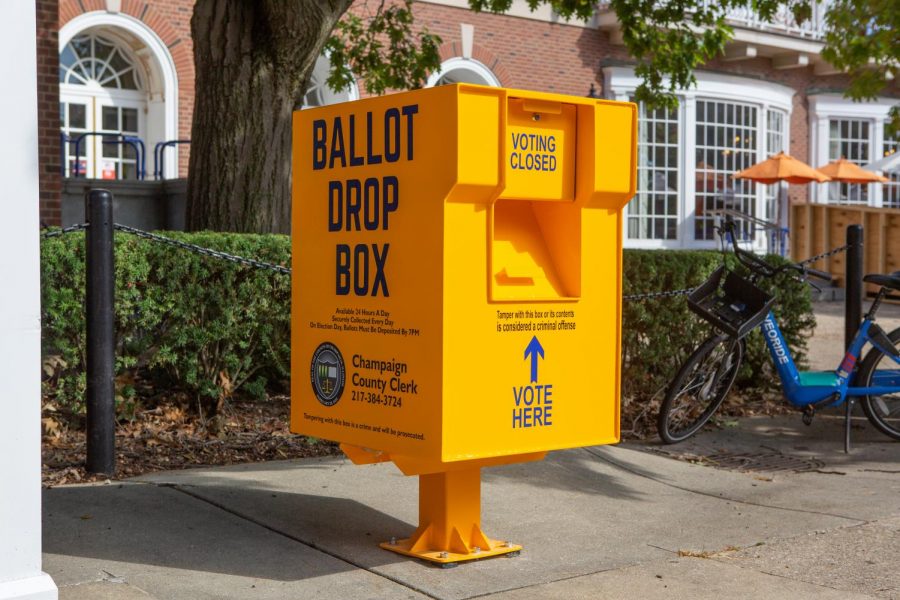 Voters in Champaign County now have more access to ballot drop-off locations thanks to the passage of a new state law funding installations of new boxes.
House Bill 1871, signed into law by Gov. J.B. Pritzker, authorizes the state to use funds for the creation of additional drop boxes for ballots, expanding the current system of ballot boxes around the county.
Specifically, these new ballot boxes are designed to be permanent installations, compared to the temporary drop boxes during election week. The new law goes into effect immediately.
Additionally, H.B. 1871 also authorizes curbside drop-offs for ballots in all future elections, expanding the right for all Illinois citizens to vote from their vehicles and deliver their ballots to workers at designated sites. Previously, only voters with qualified disabilities were allowed to use curbside drop-off voting.
“By making ballot drop boxes and curbside voting permanent features of our elections, we’re ensuring that all voters can access the ballot, especially our most vulnerable residents who may face barriers to voting in person,” Pritzker said in a news release.
A list of ballot boxes in the Champaign-Urbana area can be found on the Champaign County Clerk’s website. The closest drop box to the University can be found on the Main Quad, directly in front of the Union.
“The new locations will increase voter access, especially in less equitable areas where accessing a mailbox might not be possible, like low-opportunity areas,” said Angela Patton, chief deputy clerk of Champaign County.
In order to ensure that the voting process is secure and free of fraud, additional security measures will be implemented by the State Board of Elections, according to the text of H.B. 1871.
One of these measures is the design of the boxes themselves. The boxes are constructed out of heavy steel, and “all collection sites shall be secured by locks that may be opened only by election security personnel,” a key step in protecting voter information, according to Pritzker.
H.B. 1871 was passed in preparation for the elections currently held across Illinois. The Champaign County consolidated general election recently ended last Tuesday, and election results can be found on the Champaign County Clerk’s website.
Voters can expect mail-in voting and curbside drop-off to be a part of Illinois elections in the future.
“With H.B. 1871, more people will have the access they need to go vote, which is really important in ensuring our elections are healthy and represent our county,” Patton said.