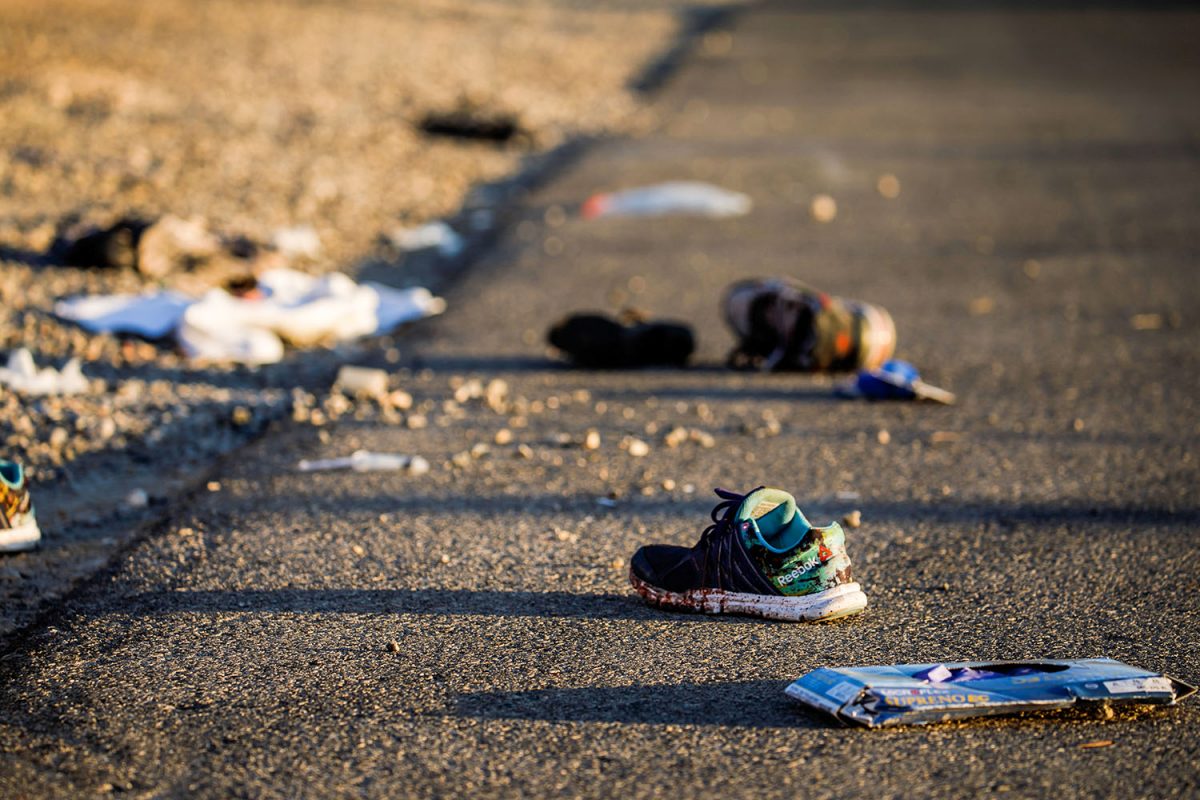 Discarded personal items covered in blood sit on Kovaln Lane, in the aftermath of the mass shooting leaving at least 58 dead and more than 500 injured, in Las Vegas on Oct. 2.

Hiam Hafizuddin and two of her friends were running late from the casino to a show they had tickets to early Monday morning. The group, in Las Vegas to celebrate a birthday, got a text from a promoter.

The promoter said not to come because shots were reported near the venue and roads were being closed off.

Hafizuddin, senior in Business, initially didn’t believe him. The group faintly heard the first round being fired, but brushed it off as fireworks.

As the rounds continued, they saw paramedics and police rushing to the scene of the Mandalay Bay Resort and Casino — where Stephen Paddock opened fire on the Route 91 Harvest Festival. As of publication, the death toll is at 59, with 527 injured.

“We started seeing a flood of people rushing around and frantic,” Hafizuddin said, adding that the scene was “chaos.”

They got an Uber and took refuge in a strip club — the only high-security place they could find that was open.

“We’re all very equally terrified, and we just didn’t want to be there anymore,” she said. “We’re just trying to understand what was happening.”

“We’re all very equally terrified, and we just didn’t want to be there anymore … We’re just trying to understand what was happening.”

Hafizuddin said they were allowed to return to their hotel, the MGM Grand, across the street from the attack, around 4 a.m. People were still recovering in the lobby, bruised and bloody from escaping. Some bodies were being carried out.

“There were all these displaced people in blankets crying in our lobby,” she said. “A lot of them were people that escaped from there. Some people were injured and were sitting and waiting there to get help.”

After watching the news for a couple of hours, Hafizuddin and her friends went to bed, “trying to feel normal.” But to her, Vegas just didn’t feel like Vegas anymore.

“People were starting to go outdoors again in the middle of the day, but it was really quiet,” she said. “No one wanted to talk about it.”

She does find fault with some reactions to the shooting.

She noted a difference between the local Las Vegas media’s reporting and the national outlets, saying that the national organizations tended to humanize the gunman.

“Local news (outlets) right off the bat were calling it an act of terror,” she said. “I especially think that these things are going to continue to grow, especially making this shooter seem like a normal person (through) idolization.”

But Hafizuddin would return to Las Vegas. Because this happened on a “random Sunday,” she said it could happen anywhere.

“I don’t think you should stop living life,” she said. “These kind of things just happen out of nowhere. You can’t just stop living because of it. It’s understanding the situation and taking action.”