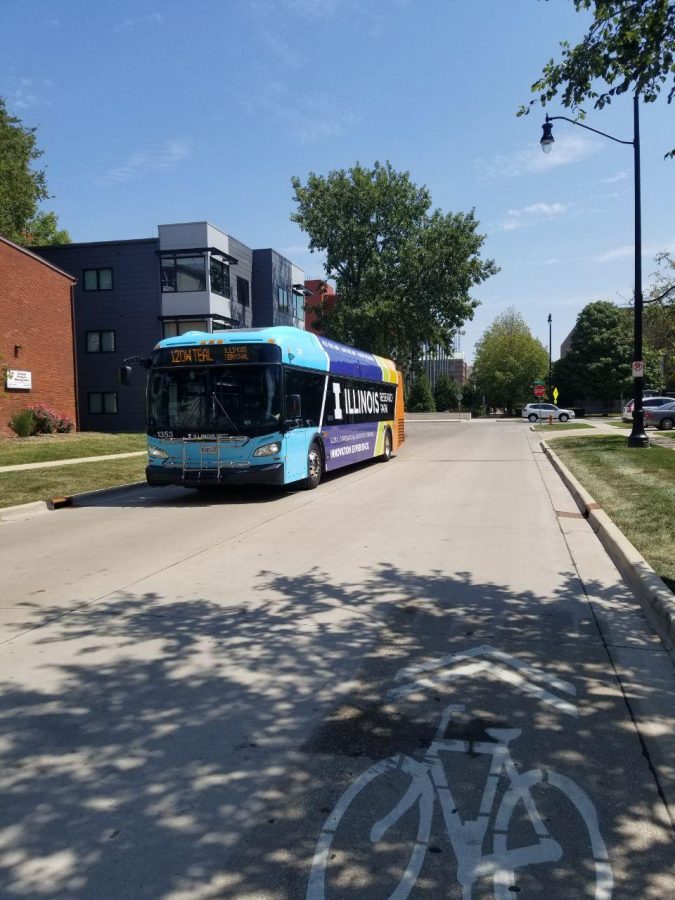 A Champaign-Urbana Mass Transit District bus traveling the 120W Teal route makes its way down White Street on Sunday. While traveling northbound on Fifth Street in Champaign, an MTD bus was caught in gunfire on Sunday.

On Aug. 23 at about 11:30 a.m., a Champaign-Urbana Mass Transit District bus was caught in gunfire while going northbound on Fifth Street in Champaign.

The driver and the five passengers that were present within the bus were uninjured.

The gunshots came from the drivers of two cars that were on East Columbia Avenue and North Fifth Street. Two shots from the driver on Columbia struck the side of the bus.

“That day, we took and burned copies of the onboard footage,” said Amy Snyder, chief of staff at MTD. “We have cameras on the inside and outside of our buses, so we turned that in to our investigators.”

While neither the bus driver nor the passengers suffered any injuries, many were “shaken” at the shooting, MTD managing director Karl Gnadt told The News-Gazette.

Snyder said bus drivers are trained to deal with emergency situations. Although the training cannot predict what exact emergency situations the drivers will find themselves in, MTD expects its staff to follow a general set of protocol. This involves stopping the vehicle and calling for help.

“There are several ways in which they can get help from our control center, from the police, so they are by no means out there by themselves,” Snyder said. “They’re trained on how to get help and how to communicate their circumstances, so that way, they have all the support they need for their next steps to respond to whatever emergency is at hand.”

Gnadt said he believes this is the first time an MTD bus has been struck by gunfire.

“I believe that this is, as our managing director said, an unfortunate first, and he’s been with the district for 30 of its 50 years,” Snyder said. “Something like this has never happened.”