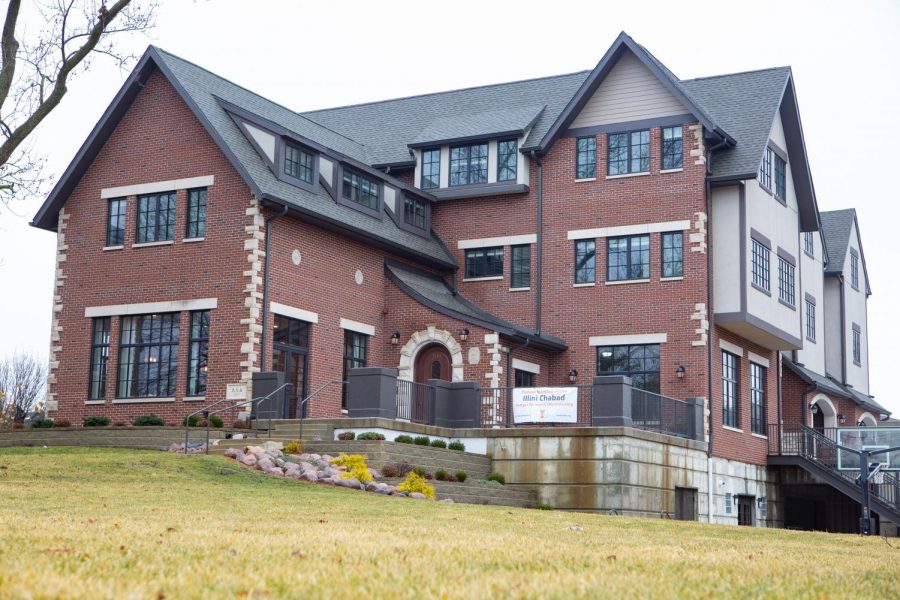 The Illini Chabad House stands on the corner of Armory Avenue and Arbor street.

\It’s coming up on a year since that fateful week in mid-March, when COVID-19 jumped from something people only read in headlines, to suddenly being very real. March 13 was the last day on campus for many students before returning to their homes to quarantine and wait for things to get better.

The same occurred for campus institutions — specifically religious institutions. Synagogues, churches and mosques, among other places of worship, closed due to COVID-19. While reopening has been staggered, each institution has had to adapt to keep serving their communities for the past 11 months.

There are two universal aspects to any religion: the individual relationship between the individual and their respective higher power, and the community that forms within a religious institution through their shared devotion to their higher power. However, that communal aspect was taken away when the pandemic forced institutions to close their doors.

The University of Illinois at Urbana-Champaign is home to roughly 3,500 Jewish students, and myriad Jewish organizations ranging from RSOs to campus institutions. One of these institutions is Illini Hillel, a foundation of Jewish Campus life at the University. Located on the corner of John and Fifth streets, Illini Hillel serves as a center for the Jewish community at Illinois.

Erez Cohen works as the executive director of Illini Hillel. Prior to COVID-19, Cohen worked with Hillel staff and student leadership to create social and cultural programming with a Jewish theme. A typical week would include communal dinners, lunch programs and evening discussions.

When students returned to campus in the fall, Cohen was tasked with trying to figure out a way to continue offering programming in the safest way possible. He knew that students who took social distancing the most seriously would also be the most affected by the isolating side effects of social distancing, and aimed to create a space for them to have social interaction while staying safe and distanced.

“The key point here is that a lot of students who work to stay safe, don’t see people during the semester,” Cohen said. “By giving them an opportunity to get to come out and have a meal in the safest way that we can plan, we’re actually giving them something that’s really really important for their mental health while trying to be safe as possible considering the disease. If we can find a way that will be less risky for you to be around other people and break down the isolation a little bit, we might be able to have people stay safe longer.”

Hillel began offering one-on-one appointments, either over Zoom or during a walk around campus (weather permitting) for students to work with Hillel leaders. Instead of evening programs, Hillel began to offer distanced craft nights where students would pick up packages of craft supplies from the Hillel building earlier in the day and log onto a Zoom meeting later in the day to work on the crafts individually, from their own rooms, but with the virtual presence of others.

Prior to COVID-19, a large portion of Hillel’s programming centered around food. Cohen explained that communal dining is a great way to foster community, and offering food helps to combat food insecurity, a growing problem on college campuses regardless of religious beliefs. However, COVID-19 has helped Cohen realize that it is not the food itself that’s important, but rather what the food can bring.

“We learned that students are really, really looking for content and connection,” Cohen said. “The food is no longer the main attraction, its being with each other. I think that’s going to be a cultural shift for the rest of the decade at least. Anyone in middle school or high school right now is experiencing this deep isolation, and bringing people together is going to be an attraction for pretty far out in the future.”

Cohen explained the unique challenges COVID-19 has brought on the Jewish faith.

“There’s a unique element in Jewish practice that basically says that practicing Jewish people have two obligations,” Cohen said. “One is they need to pray on their own, but the other obligation is they need to come together as a community and pray. That second part has been extremely challenging during this pandemic. That created a whole new experience for Jews where the religious authorities, the Rabbis, had to say ‘your life,’ which is another Jewish value that plays into that, ‘your life is more important than your communal prayer.’”

Another Jewish institution on campus is the Chabad Center For Jewish Life & Living.

Eighteen years ago, Dovid Tiechtel and his wife Golde moved to Champaign with the goal of starting a Chabad house on campus. A Chabad house, named for the Chabad movement, is a center for disseminating traditional Judaism and providing a space for a campus’s Jewish community. The Teichtel’s succeeded in their goal, establishing a vibrant center for Jewish life in 2003 that has grown enough to warrant moving into a larger house.

In July, the Teichetel’s purchased the old Lambda Chi Alpha fraternity house, after the fraternity fell on financial hardship and had their charter revoked by the University. The 27,000-square-foot former Greek house now functions as one of the largest Chabad houses in the nation.

Like Hillel, Chabad shifted the majority of its programs to an online or hybrid format. They began using the Safer Illinois app to check students in before entering the house, limited the number of students allowed in at a time, and required masks at all times.

Finding a balance between mental health and physical health has been important for Dovid Teichtel, citing the increased mental health issues social distancing-induced isolation has brought on students.

“As a Rabbi and director of students for 18 years on campus, I’ve never seen as much anxiety and depression than I have during the past half a year,” Teichtel said. “You need to get people out of their dorms, out of their apartments, out of their houses. You cannot be in your room 24 hours a day. And even worse than that, some people are turning to substance abuse in order to relieve their anxieties. It’s terrible.”

To combat rising mental health issues, Techitel has made it a focus of Illini Chabad to foster a sense of community as best as possible during a time where traditional communities have been disrupted. He converted one of the large rooms in the house into a study room, with ample distance between tables, so students could attend to their studies with the presence of other people.

Weekly meetings and large events that would be emblematic of Illini Chabad prior to the coronavirus have been replaced with one-on-one meetings, coffee breaks and check-ins with students over the phone or on zoom. When community members have tested positive for COVID-19, Teichtel makes it a point to organize a contact-free chicken-soup delivery.

“It might be physically distant, but we need to be emotionally close,” Teichtel said. “I have to say, from all my years on campus, this has actually been my busiest year in another way. It’s another kind of busy. It’s not busy in the way of throwing a barbecue every weekend for 300 students, it’s busy trying to create 300 experiences, individually on a smaller level. Don’t change the experience, change the way the experience is happening, that’s our motto at Chabad.”

While the stresses the pandemic and social distancing have brought on communities like Illini Chabad have been difficult, Teichtel finds joy in being able to use his skills to help those in the community who need help most.

“This is what we’re here for, right, to help people,” Teichtel said. “This is why I came, this is what I signed up for. I’m generally a people person, so nothing gives me greater happiness than being able to help a person. I wish there wouldn’t be people struggling, but that’s the reality of the way the world is. There’s always going to be a struggle. If you’re looking at life, it’s not about me but the ways I can help the  person I’m helping.”

Prior to COVID-19, no week looked the same for Alan Cook, a Rabbi at Sinai Temple in Champaign. Some weeks, he’d visit community members in the hospital or attend funerals for the deceased. He’d spend his days preparing for weekly classes and worship services, and meeting with groups of congregation members for executive functions. Despite his busy schedule, there were two constants from week to week: Friday services, and a busy schedule.

When COVID-19 forced students off-campus, Saini Temple closed its facilities to help prevent the spread of the virus. As with most other religious institutions, Cook and Saini Temple shifted to an online format to fulfill the community’s religious needs in a distanced manner. While there was a learning curve to setting up livestreams and recording worship videos, Cook developed a new skillset born out of necessity.

“I became a tech guru and a video editor, and all these things that seminary never trained me for,” Cook said. “I know many of my colleagues have done the same just out of necessity because we wanted to continue to deliver programming and worship to our congregations.”

Creating a space for both worship and community online has been a challenge for Cook, but there’s been a silver lining to shifting to an online format. Located in a college town, the younger portion of Saini Temple’s congregation tends to shift often. Cook said that with services and programming being held on the internet, former congregation members have been able to return, attending virtual services from across the country. Conversely, Cook believes new community members may have an easier time introducing themselves from the comfort of their own homes.

“Zoom has broken down those barriers and allows people to return to us even though they’re geographically distant,” Cook said. “That’s been heartwarming and rewarding for many people to see their old friend showing up on the screen. In pre-COVID times, coming into a new community and walking into a new building, there’s a certain amount of courage that it takes. Coming into a Zoom room, you don’t have to turn on your microphone if you don’t want to, you don’t have to turn on your camera if you don’t want to. There is a much lower barrier to socialization on Zoom than there is taking the risk and putting yourself out there in person.”