University students reckon with the death of Adam Toledo, reflect on its ramifications 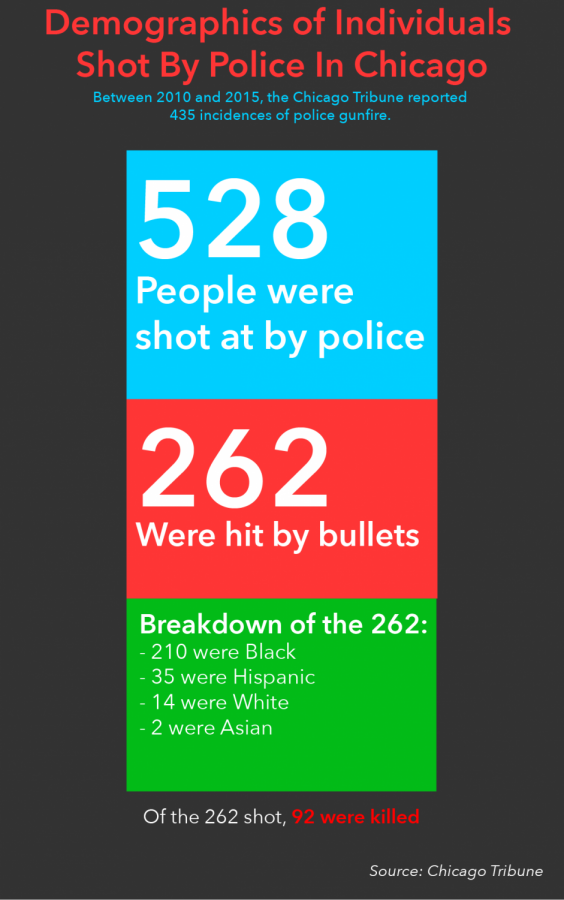 In a dark Little Village alley on March 29, a shot reverberated throughout. Within seconds, Adam Toledo, a 13-year-old Latino child, crumpled to the ground following the gunshot fired by Chicago Police Department officer Eric Stillman, according to body camera footage released to the public on April 15 that documented the fatal encounter.

In the released footage, Toledo is seen complying with the officer’s orders by raising his hands right before Stillman fired his gun. While a gun was located at the scene, the footage reveals that in the brief moment leading up to Toledo’s death, the child was unarmed while raising his hands and turning toward the officer.

This incident is indicative of a racist system that continuously criminalizes and kills Black and brown individuals, according to Genesis Rivera, freshman in Education who is from Little Village.

“This was a 13 year old kid — he was a baby — and (cops) still shot him because when police look at Black and brown bodies, all they see are criminals,” Rivera said. “We’ve been criminalized since the beginning of the United States, and so it just goes to show how no matter what you’re doing, police are still going to shoot. Adam did not have a gun. He has his hands up. He was being compliant, and he still got shot because police are racist and they criminalize Black and brown bodies — Black and brown youth.”

Following the release of Toledo’s death, an array of comments attempting to justify the murder of a Latino child saturated social media feeds, which made it more difficult for Rivera to grieve. The comments ranged from blaming his parents for allowing him to be out at night to blaming him for his supposed involvement in a gang.

“The first thing that I felt when I read (about the shooting) was sadness, but as soon as I read those comments, I was just filled with anger and frustration that all these people were trying to justify the death of a 13 year old kid,” Rivera said.

Josh Small, freshman in LAS, who grew up in Chicago, similarly found himself disheartened by all the comments that sought to justify this interaction and felt that it spoke to a breakdown of the Chicago community.

However, Rivera emphasizes that it should not matter whether Toledo was or was not partaking in gang activity because he was ultimately just a child whose death was unwarranted. His gang activity speaks to larger systemic issues saturating Chicago and its citizens.

“Literally if he was gangbanging and stuff, so what?” Rivera said. “So does every other kid here because that’s all we know. Growing up in a community that continues to be disinvested and disenfranchised with no mental health resources — no resources for our youth — of course you’re going to join a gang and of course you’re going to find safety in gangs because where else are we going to find safety? Not in police.”

In response to the death of Toledo, Chicago Mayor Lori Lightfoot announced that a foot pursuit policy would be created. Presently, Chicago only has a foot pursuit training bulletin that states the following: “When making the decision to pursue or to continue to pursue, the safety of the public, Department members and the fleeing subject should be the foremost considerations.”

Small, who wholeheartedly supports Lightfoot and has confidence that she will ensure justice is served, believes this is an effective first step albeit there is more to be done. He wishes to see accountability from this incident, which he believes can be done through an external investigation as well as Lightfoot’s efforts to reduce the divide between CPD and Chicago residents.

“I want to see the gap bridged between the police department and the residents of Chicago, and not only of Chicago, but in this instance in Chicago, just the whole police versus citizen thing – citizen versus police. I just want to see the community come together as one,” Small said.

Small believes that something must occur for trust to return in Chicago communities between cops and Black and brown individuals.

“Right now there’s no trust in the community and with no trust comes death,” Small said. “The police are scared of us and we’re scared of the police. I don’t think that police officer intended to kill him, but I don’t think it was just.”

Unlike Small, Rivera adamantly opposes this policy and urges Lightfoot to resign. The solution to instances like these is not small reforms but rather the abolition of the entire system, which includes police and prisons, according to Rivera.

“They still have the power to shoot someone and their kids, and our communities are still going to be criminalized by them,” Rivera said. “It addresses no systemic issues, and that’s why reform does not work. It does not matter how many laws you put in place because if the system is still there, stuff is still going to happen because it’s the system that was built to criminalize us and to have Black and brown youth and Black and brown people in prisons.”

Rather than sustaining these racist systems, Rivera believes funding must be allocated toward the Chicago community in the form of schools and mental health resources.

“Our neighborhoods have so much trauma, and we’re not getting any help,” Rivera said. “When a white kid shoots up a school, the first thing they talk about is mental health. What about us? We literally grow up seeing kids our age getting shot by (cops) and getting shot by other kids our age.”

Like Rivera, Angelo Guzzo, freshman in Engineering and from Chicago, believes this incident speaks to a larger issue of systemic racism.

“There’s a culture where police officers are killing people,” Guzzo said. “It’s the same culture where police officers have been targeting Black and brown individuals long before that, especially in the mid 1900s with the Civil Rights movement. It’s the same system that targeted Black and brown people during the Jim Crow times.”

Due to the repetitive nature of these fatal shootings between officers and Black and brown individuals, Guzzo has grown extremely disillusioned by the system and is unsure how to properly address something so inherently corrupt.

“I just think about the system, and I wish it was for us,” Guzzo said. “I can’t help but look at it and say, ‘Wow, you know, no one’s really doing anything to help!’ We have a mayor, and we have these people on top. We’re supporting them, and nothing really has happened.”

In response to the death of Toledo, Guzzo said he has felt it extremely difficult to carry on with his life and obligations.

“I just don’t know what to do with my life because I don’t know how I can just continue with my life, get a degree and, you know, just live like nothing happened,” Guzzo said.

Like Guzzo, Rivera has also found it impossible to grasp and deal with Toledo’s death, especially given her Mexican identity and desire to become a teacher in Little Village or surrounding communities.

This instance, as well as other similar instances, force Small to reckon with the high possibility that in the future it could be him and those close to him.

“When I see these videos, it’s kind of like, ‘Who is that?’” Small said. “You know, is it me or is it someone that I know or someone in my family? You know, one of my friends. And I think that’s how we all relate to it. We are not all getting shot at, but we can all feel the pain.”