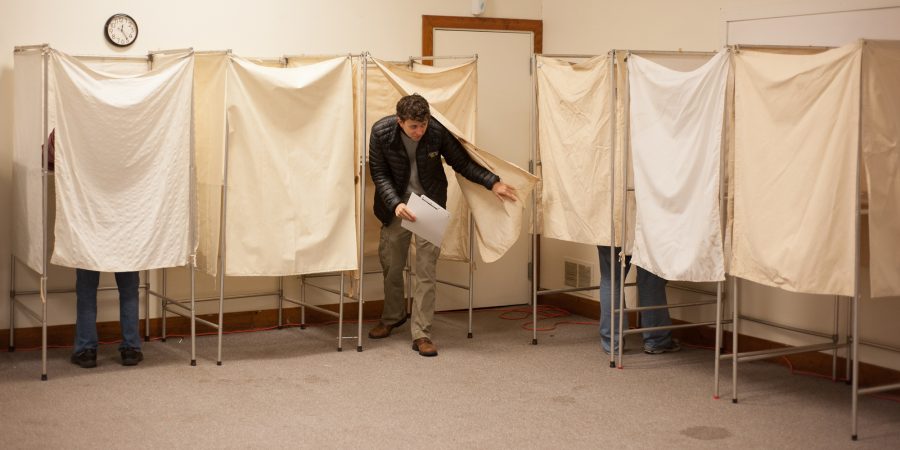 Richard Grant, of Champaign, steps out of the voting booth at the Salvation Army in Champaign, on election day, Tuesday, Nov. 6, 2012.

By The Daily Illini Editorial Board
October 2, 2016

Voting in this year’s election just got a bit more difficult for residents of Illinois’ biggest counties.

While the judge’s ruling is unbiased, the appeal that led to the injunction seems petty and self-preserving.

The Republican appeal claimed that these registration requirements made it “more difficult for people to register to vote in some areas of the state than others.”

This is true, but it seems unlikely that Republicans would have issued an appeal if the law had been in reverse;  in large counties people could not register to vote on election day, but in small ones they could.

The Republican state legislature is aware that most residents of highly populated urban areas tend to vote Democrat — like young people and people of color.  They do not want them to be able to register to vote on election day and take votes away from Republican candidates.

We believe the court is correct in regarding this same-day registration law as unconstitutional. No county should have more voting advantages than another.

But by submitting an appeal instead of proposing a bill that would give smaller counties the same right to same-day registration, Republicans are only taking away votes, not adding any.

This is the first time many on this campus will vote in a presidential election. Although it is important to think ahead, this generation admittedly isn’t the best at that.

We’re all too often caught up in the heat of the moment. We think about the next tweet, the next Snapchat story, but not everyone plans ahead to send a ballot by mail, nor do they have time to go to a larger county.

This appeal not only inconveniences busy students, but other people who make up the largest populations in the state.

If Republicans are going to claim they are looking out for the disadvantaged rural people, then they should mean it instead of playing political games.

State politicians shouldn’t pretend they truly care about disadvantaged voters when they only care about saving themselves.