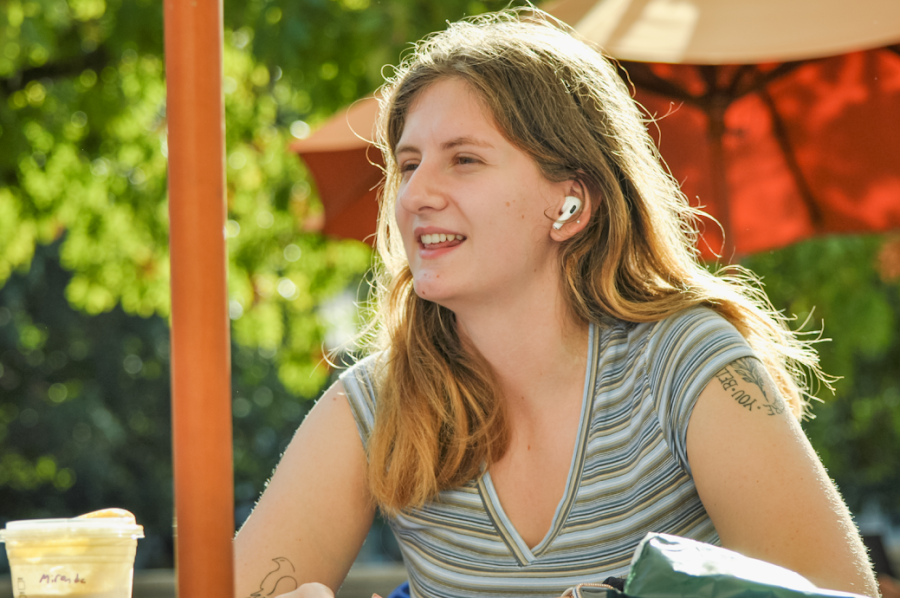 Miranda Stillwell, sophomore in LAS, shares her opinion on protesting policies the University has put in place.

By Samuel Rahman and Caroline Tadla

This school year brought along changes to the Expressive Activities on Campus Policy governing behavior on University grounds that many are now taking notice of:

This includes “speech, assembly, demonstrations and any other expression protected under the First Amendment to the U.S. Constitution or Article I of the Constitution of the State of Illinois.” The corresponding answers follow several students’ reactions to the policy that will govern campus behavior:

“I feel like it makes sense for them to put up regulations if it’s disrupting classes but — in terms of just taking away students’ ability to voice their opinions or protest something they are very passionate about — it’s just quite unfair. It kind of takes away students’ ability to voice their opinions on campus which I think is important for administrators to take in mind — the wellbeing of the students.”

“Well, admittedly, I haven’t been on campus very long so it’s hard to say how many protests I’ve seen. I’ve only seen one. But I imagine that if you have an issue that you want to bring up; it will be harder to get the attention of people with these restrictions in place.”

“I guess, having read through most of the policy, some of the things in there do make sense to include like saying ‘no property destruction,’ ‘no large fires.’ But, I mean, other things I feel like it definitely does restrict students ability to protest and kind of express what they believe.”

“My opinion is that if you are using a loudspeaker at night, it may be annoying. But if you want to do some protest about your rights — in the morning with lots of people around you — I mean that’s OK. The college should not restrict students’ ways of (expressing themselves) for their justice.

“I feel like if it’s something definitely well-organized — which I’ve seen a couple well-organized protests that happened before, that doesn’t necessarily restrict classes as much. It’s a pretty big area. That’s just a little — I wouldn’t say upsetting — but it’s concerning because it is our campus as well. We are paying tuition here too.”

“They are completely restricting our freedom of speech as students at the University and our right to assemble. That is super wack. To be honest I don’t know a better way to put it. There is a lot of stuff that is going on in the world right now that is creating a lot of political unrest and for them to put so many restrictions on how people can and cannot voice their dissatisfaction — either at this (University) or the country at large — is ridiculous.”

“This is a college campus. We should be able to speak our voices the most because that is what a University is about. It’s about growth and university and spreading information and ideas freely.”

“I actually filled out the feedback form and I got some messages about it. They were like, ‘this is not a policy that is oppressing anybody, it’s just to make sure the protesting is quiet.’”

“So, I was kind of ticked off because of that. And when I saw they were making that policy in the first place, I was like, this goes against our generation because we are very outspoken and we like to protest.”

“I did not really appreciate it and it is a bad look for the University to be taking those kinds of actions against people who want to use the First Amendment. I’m really glad there is a cohort of people trying to revoke the policy because it shows they want to support our right to speak out.”

Samuel is a senior in LAS