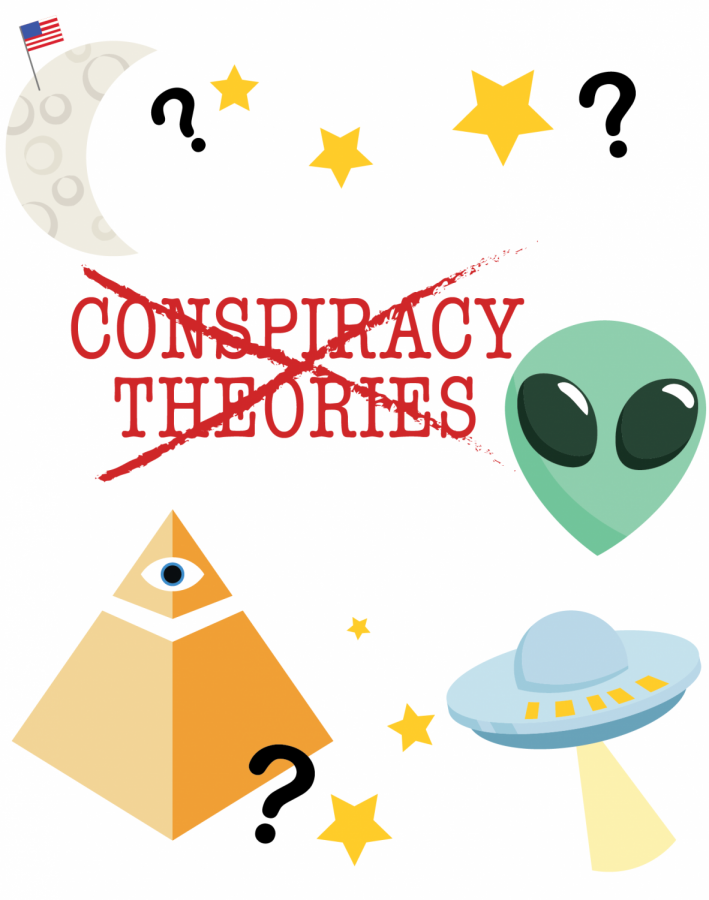 The Illuminati, JFK’s assassination, the death of Marilyn Monroe and Lizard People. These are all intricately sewn conspiracy theories fabricated by individuals who believe someone has something to hide.

The term conspiracy theory was defined by political scientists Eric Oliver and Thomas Wood as “narratives about hidden, malevolent groups secretly perpetuating political plots and social calamities to further their own nefarious goals.” While many of these stories are so outlandish that it’s presumable hardly anyone would believe them — and while they’re certainly entertaining and will mess with your brain — they can also be dangerous when entertained by someone with the wrong intentions.

We saw this last year in December when Edgar Maddison Welch barged into a D.C. pizza parlor with assault weapons because he believed it was a front for child sex trafficking led by the Clinton campaign and other left-wing political figures.  Although no one was injured, the incident certainly left psychological damage on all who were involved and damaged the reputation of the restaurant.

Of course, many would assume Welch is an anomaly and that another factor probably came into play when he decided to go through with his attack; however, it’s believed that about 50 percent of the public endorses at least one conspiracy theory. And while attempting to shoot up a family-friendly pizza parlor may be an extreme case, conspiracy theories can manifest themselves in equally dangerous ways.

A popular example is the fabricated 1998 paper penned by researcher Andrew Wakefield who misreported that he found a correlation between the measles, mumps and rubella vaccine and autism that was later proven untrue. Even after almost 20 years and plenty of information disproving the theory, 152,763 preventable illnesses and 9,028 preventable deaths have occurred due to the anti-vaccination movement entertained by conspiracy theorists, according to the Jenny McCarthy Body Count.

What’s more is that the growth of the movement was likely influenced by celebrities like Jenny McCarthy, who endorse the practice of not vaccinating.

Considering how quickly these false conclusions can spread, it’s concerning how much reach the YouTube conspiracy theory genre has grown. It is dangerous for acclaimed YouTube celebrities to bring attention to conspiracy theories, because not only do they gain hundreds of thousands — if not millions — of views, but their audiences are largely made up of highly impressionable teens who don’t know any better but to believe what their idols tell them. Although there are content creators who acknowledge the insanity of some of these stories, these disclaimers often will be overlooked.

Anderson Cooper made a similar point in 2013 regarding theories about the Sandy Hook shooting that were endorsed by Florida Atlantic University professor James Tracy. The tenured professor claimed that the Sandy Hook Shooting was a hoax and may not have happened at all in a post on his personal blog. Tracy’s claims were debunked by Cooper during his news program.

While I understand that in the age of “fake news,” we should be critical and analytical of the information we are consuming, figures of presumed authority must also be cognizant of the claims they are making because they hold more power and responsibility than the average Reddit user who might gather a few “thumbs-up.”

With this being said, as well-educated, thoughtful students, we have the responsibility to be mindful of the conclusions we’re making, and I encourage all of you to appropriately evaluate the information that you’re not only consuming, but also distributing to your peers.