Staff editorial: Not the solution 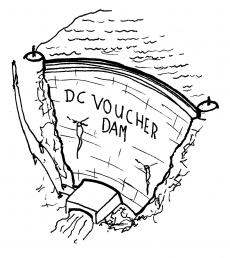 This year, more than 1,000 students in D.C. will take advantage of a new voucher program approved by Congress. The vouchers give scholarships and financial aid to students whose families meet low-income requirements.

Parents who qualify now have the choice to send their children to public, private or parochial schools without worrying about tuition costs.

In the past, the D.C. public school system has been marred by gang violence, dwindling enrollments, layoffs, budget deficits, poorly maintained facilities and the lack of a committed superintendent. It’s no wonder parents want a choice when it comes to their children’s education.

However, are school vouchers the answer? By allowing students to leave troubled schools, it only encourages those schools to fall further behind. Increased enrollment in private and parochial schools might create overcrowding and decrease the overall quality of education at those institutions.

Moreover, the sense of community created by a close-knit, local population could be damaged by shipping children outside their districts. Finally, the influx of low-income children into private and parochial schools could be emotionally trying, as new students cope with renewed prejudices over class and background.

Vouchers merely kick real problems that public schools face down the road. In the short run, students might benefit from the ability to attend better schools. However, in the long run, school voucher programs simply will stall any future public school reform.

In addition, punishing underprivileged schools with decreased enrollment from vouchers is not the answer. Negative incentives and less funding only hurts them more. Likewise, blindly throwing money at struggling schools is not necessarily the solution (D.C., for instance, already spends more money per pupil than most state and national averages).

Sadly, parents have heard these arguments before. In reality, opponents of school vouchers have repeatedly failed to come up with any real alternatives for public-school reform. It’s unfair to tell parents to wait for significant changes and then not deliver.

What must be overhauled is the way schools are funded. In most cases, property taxes pay for public school funding in each district. Thus, students who live in rich neighborhoods often attend better schools than those living in underprivileged neighborhoods.

Money spent on school vouchers should be spent on equalizing school funding in underprivileged areas. Positive incentives such as pay raises for teachers and budget increases should be implemented and properly monitored. Likewise, by creating a separate education fund for wealthier residents, government can ensure there will be no limits for parents who have the means to increase funding to their district.

Ultimately, the D.C. voucher program is meant as a quick plug to an incredibly leaky dam. But the leak isn’t the real problem – it’s the dam itself.