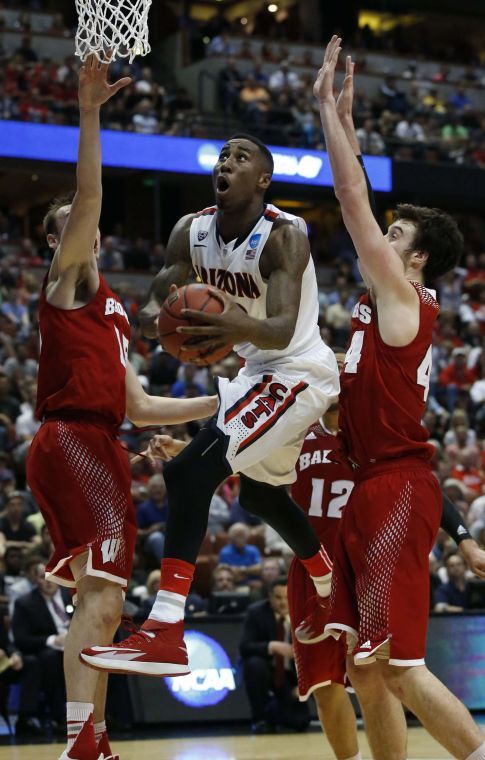 Arizona’s Rondae Hollis Jefferson makes a circus shot between two Wisconsin defenders late in the game in the NCAA Tournament’s West Region final at the Honda Center in Anaheim, Calif., on Saturday. Wisconsin advanced, 64-63, in overtime after Arizona failed to get a shot of following a lengthy review by officials.

Saturday’s Elite Eight matchup between Arizona and Wisconsin very well might have been the game of the tournament. Rondae Hollis-Jefferson made huge plays during regulation for the Wildcats to force the game into overtime and Wisconsin’s Frank Kaminsky was simply unstoppable.

The game came right down to the wire. Then with 3.2 seconds left, the referees struck again. By again, I am referring to the subpar officiating performance in late-game situations throughout the NCAA tournament.

To finish the thought on the in-game action, it was a thriller and ultimately ended how it should have, technically. It wasn’t a perfect ending, but objectively I suppose Arizona fans would say justice was served. The Wildcats got the last possession with 2.3 seconds to go. Nick Johnson was unable to get a shot off before the buzzer.

To that end, Wisconsin fans could argue Johnson’s inability to get a shot off was justice served as well. That is considering how the longest 3.2 seconds in NCAA history unfolded.

Down one point, Johnson drove right and was whistled for an offensive foul before getting his shot up. Granted, there was a little push off, it was not enough to warrant the call. Ignoring the fact that only a full extension of the off arm or a blatant blow to the face should have been called and neither occurred, what referee makes that call in that situation? You let the players decide the game. Nonetheless, a slight flop gave the ball to the Badgers.

Then, after an eternity of camera review, the call was overturned. There must be indisputable evidence to overturn a call on camera review. If the television broadcast is accurate in providing the series of angles the referees were reviewing, there is absolutely no way the refs should have overturned that call, especially not with a Final Four bid on the line.

The gravity of that game and referee blunders drew a lot of attention. Shall I point to another fairly recent instance where the refs reign supreme?

There are some people who might discard my next point by citing a change in the style of college basketball, how it’s less of a physical game and the offensive players have to be protected.

Physicality is still very much a part of basketball. There has been a gross overreaction to physical play as of late on-court and in the rulebook. Louisville and Kentucky are two physical basketball teams, albeit two very smart basketball teams.

The end of their game was poorly officiated.

Louisville’s Montrezl Harrell picked up two late fouls by holding his position with his arms straight up. The offensive player created the contact. It was a strong play by a Wildcat player and should have been a no-call in both instances. Instead they eliminated one of Louisville’s biggest threats on poor calls.

Alex Poythress should have been called for an offensive foul late in the game after he clearly lowered his shoulder and plowed through Luke Hancock. Poythress then traveled, another missed call, before he was fouled and rewarded with two free throws.

Let’s not forget the foul called on Julius Randle. Wayne Blackshear created the contact on a drive to the basket and Randle did a great job of timing the block. The referees did not see it that way.

The Jarnell Stokes offensive foul called late in the Tennessee-Michigan game was the icing on the cake.

The argument is that the referees have to make a call in a split second, so they cannot get every call correct. True.

It’s just amazing they get the calls that impact the game the most frequently incorrect. I hear the split second argument, but that’s what referees are trained to do. Not to mention the advancements in replay and the fact that there are three referees.

Referees have missed calls for years, that’s no secret. Now more than ever, it just appears to be in late game situations, which cannot happen. It’s almost right after the under-eight minute television timeout that the bad officiating takes place.

I don’t want to condemn all officials. The Michigan State-Virginia game was well officiated. But bad officiating is an added element players and coaches have to be wary of, and it should not exist.

There is constant talk from the broadcasters throughout games about players adjusting to the way the game is being officiated. How about the referees adjust to the style of basketball individual teams play? Some teams play physical without fouling. Their style can’t be hindered, especially if it’s under the letter of the law. Because if an official calls a game the way he thinks it should be called, there is no balance.

And can we please get a replay official?

Spencer is a senior in LAS. He can be reached at [email protected]