It was a year of transition for Illinois athletics 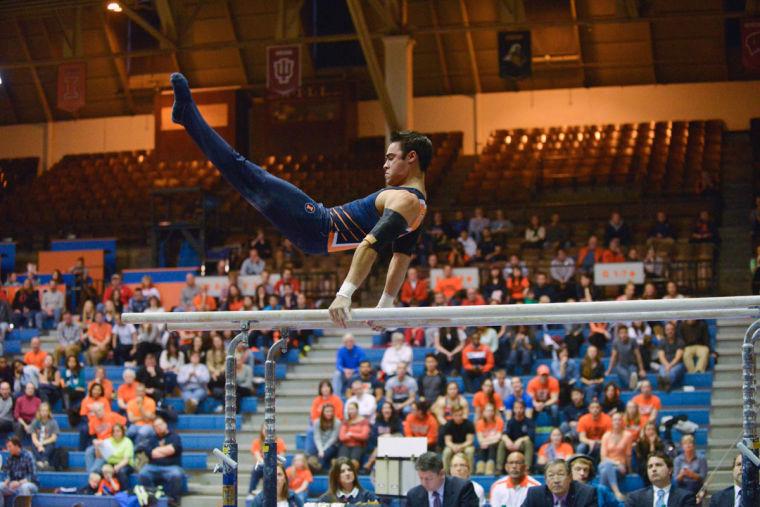 Jordan Valdez performs the parallel bars routine against Ohio State at Huff Hall on Sunday, Jan. 26. In a year filled with many Illini athletic disappointments, Valdez's NCAA title contributes to some of the success the Illini did experience in the spring.

Another year of Illini sports is drawing to a close.

The past calendar year has been an eventful one for Illinois athletics. Campus has seen renovations begin at multiple iconic venues. The “Illinois brand” received a new identity, courtesy of Nike. Star athletes in several sports emerged on the national scene.

Ultimately though, nothing stands out to me as proof that this year was a definitive success. To be honest, I won’t remember the 2013-14 year of Illini sports as overly positive. My Illini fan ego took a bruising on more than one occasion.

Most notably, it took a hit on what may be the three consecutive most depressing days in recent Illini history.

The pain started last Nov. 14, when Quentin Snider, the Illinois men’s basketball team’s highly-touted recruit, de-committed from the Illini and committed to Louisville. The very next day, Cliff Alexander happened.

In case you missed it, as one of the best high school players in the country, Alexander’s decision on where he would play college basketball was aired on national television. With several “inside sources” indicating that Alexander would choose the Illini, the day was much-anticipated. Alexander faced the camera, fake-donned an orange Illinois hat and picked up a Kansas one instead.

The incident made many Illini fans angry, myself included. Illinois became the punch-line of jokes on the Internet and even on Jimmy Kimmel Live. And since bad things happen in threes, Nov. 16 wasn’t kind to Illini Nation, either.

Pictures of a woefully empty student section at Memorial Stadium for the Illinois-Ohio State football game made the rounds on the Internet, further twisting the knife embedded in an Illini fan’s psyche.

Things looked bleak in early winter as well, when volleyball was bounced from the NCAA tournament at home and the men’s basketball team endured an eight-game losing skid.

Up to that point, the state of Illini athletics wasn’t great. But don’t worry, things got better, and an eventful spring ensured Illinois athletics was able to save face.

The men’s basketball team finished its season in decent fashion. Jesse Delgado won an individual NCAA title in wrestling and Jordan Valdez won one in men’s gymnastics. The men’s tennis, men’s golf and baseball teams enjoyed very strong regular seasons, and they all have yet to play in the NCAA postseason.

While the spring has been relatively kind to the Illini, the main reason I refuse to declare this year an unsuccessful one overall is because of the signs I saw this year that Illinois athletics is headed in the right direction. Across most of our sports, rosters are young and talented. I’m hard-pressed to come up with an Illini team that isn’t expected to improve in 2014-15.

My optimism also comes from the spring’s off-the-field efforts to make sure Illinois sports are relevant for years to come. The State Farm Center renovation and the Nike re-brand shows that we are a school that is striving to move forward athletically.

When you have a large number of teams at a Division I program like Illinois, there will inevitably be good teams and bad ones every year. There will be memorable performances and days you’d like to forget as a fan. And even though the past year brought plenty of unfortunate losses and some bad PR, I’m going to ultimately remember 2013-14 as a year of transition.

Illini fans have suffered for a while now. But I think they’ll look back at 2013-14 as the year Illinois sports began to turn the corner.

Alex is a sophomore in AHS. He can be reached at [email protected] and @aroux94.