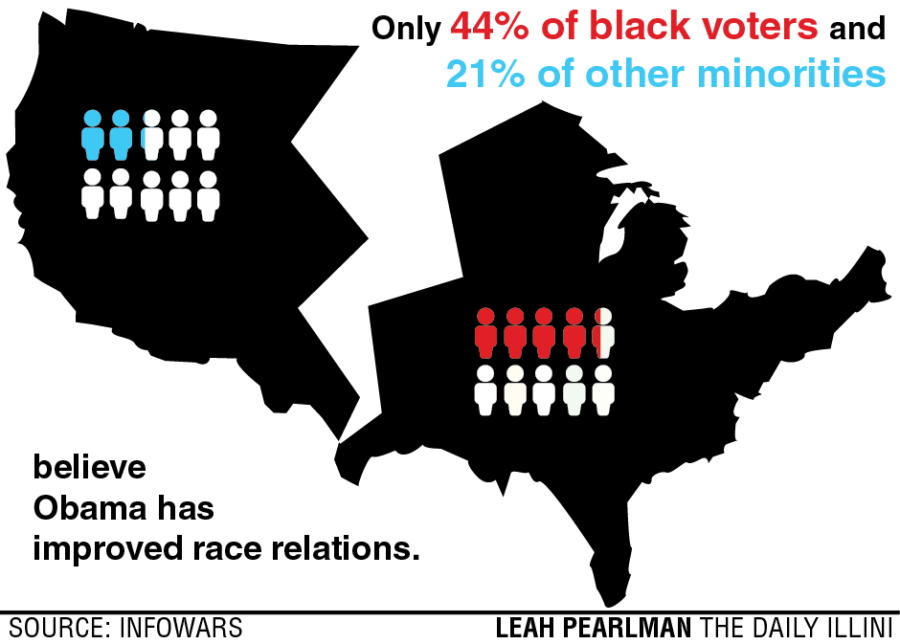 Nine years ago today, former Senator Barack Obama announced at the state capitol in Springfield that he was running for president.

The senator chose this location in part because of its historical lineage to Abraham Lincoln. For many, it seemed as though Obama, who was considered an inspiring candidate, could also become an inspiring and transformative president like Lincoln. However, as Obama returns to Springfield on the nine year anniversary of his announcement Wednesday, it seems fitting to review whether Obama met the expectations set for him.

Despite expectations, the divisive nature of the country seems only to have worsened during Obama’s tenure. Race relations in the United States have hit a 20-year low in part because of high profile shootings, the responding protests and the subsequent media coverage; however, nearly half of the American public believes that Obama is only intensifying this racial divide. http://time.com/4152668/us-race-relations-20-year-low/ http://www.infowars.com/half-of-americans-think-obama-has-worsened-racial-divisions/

Perhaps even more troubling, only 44 percent of black voters and 21 percent of other minorities believe that Obama has improved race relations. Many cite his handling of the protests in Baltimore and Ferguson as well as other controversies as the cause of this disapproval. http://www.infowars.com/half-of-americans-think-obama-has-worsened-racial-divisions/ http://www.bloomberg.com/politics/articles/2014-12-07/bloomberg-politics-poll-finds-most-americans-see-race-relations-worsening-since-obamas-election

Obama was also expected by many to narrow the political divide between Democrats and Republicans in Washington. Although Republicans share in the blame, partisan polarization has dramatically increased under Obama. http://www.nbcnews.com/politics/first-read/long-division-political-polarization-worse-ever-here-stay-n228441

Obama bears significant responsibility for this increase because of his handling of the legislature. He passed controversial programs into law strictly along party lines while his party was in power. However, when the American people rejected his platform and his party lost control, he openly defied Congress rather than attempting actual bipartisan reform. http://www.weeklystandard.com/partisan-in-chief/article/996613

Presidents from Reagan to Clinton have succeeded under divided government, but Obama was either unwilling to do so, or incapable.

Obama’s failures are also evidenced by Gallup Polling, which concluded that Obama is on track to become the most polarizing president in the history of its polling. Thus, the candidate who was supposed to be the great uniter may have became the great divider. http://www.gallup.com/poll/181490/obama-approval-ratings-historically-polarized.aspx

Obama was also expected to restore balance to our constitutional system of government. During his presidential campaign, Obama said: “The biggest problems that we’re facing right now have to do with George Bush trying to bring more and more power into the executive branch and not go through Congress at all. And that’s what I intend to reverse when I’m president of the United States of America.”

But once his party lost power, Obama seemed to forget his constitutional scruples and relied instead on his pen, phone and executive action rather than congressional legislation.

In fact, one of Obama’s lasting legacies may be the undesirable expansion of executive power. Obama has issued more executive memorandums, which have the same legal effect as executive orders, than any other president. Coupled with his executive orders, Obama is on track to take the most high-level executive action of any president since President Harry Truman. http://www.usatoday.com/story/news/politics/2014/12/16/obama-presidential-memoranda-executive-orders/20191805/

Further, by looking qualitatively rather than quantitatively, Obama’s executive actions have been more restrictive than prior presidents and have touched upon important areas of national discourse, which should remain the legislature’s prerogative. http://mercatus.org/publication/measuring-content-not-just-number-executive-orders-and-proclamations

International agreements such as the Iran deal and the Paris climate deal were entered into by the executive rather than the Senate. Obama has also issued what many believe are controversial gun regulations, changes to the immigration system and costly environmental regulations via executive order.

Since Obama has pursued his policies through executive action rather than binding legislation or treaties, the next president can simply decide not to follow Obama’s decisions. Quite simply, much of Obama’s legacy may be as durable and longlasting as the paper his executive orders were written on.

Although it is still too early to fully define Obama’s legacy, it is apparent that he failed to live up to the high expectations set for him.