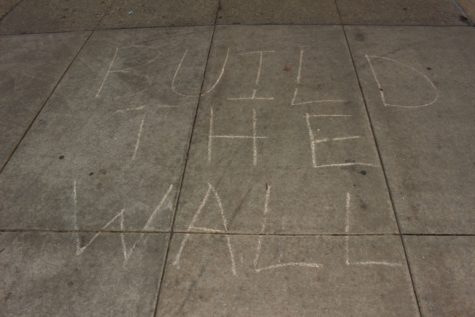 Brian Bauer | The Daily Illini
The Trump slogan chalked on the sidewalk on the Quad at the University of Illinois Urbana-Champaign on Tuesday, April 5, 2016.

Overstating the importance of the First Amendment in facilitating responsible journalism is a difficult task. It allows us to do our jobs as aspiring journalists, but more importantly, facilitates freedom of expression for all U.S. citizens.

That said, no one should use the privilege granted by the First Amendment to intimidate others. On Tuesday, an anonymous person chalked sidewalks outside of the Latina/Latino Studies building with hateful messages such as “They have to go back #Trump.”

No matter how hateful the message may be, people who support presidential candidate Donald Trump’s immigration reform policies have a right to say so under the First Amendment. Though the chalk messages didn’t present an imminent physical threat, they served to intimidate part of our student population.

No one on campus should ever be made to feel that they don’t belong, or that they are less important than others because of their race, ethnicity, culture or any other reason, really.

These chalk messages weren’t the first time members of our community have intimidated others through an abuse of the right to free speech. In November, an “Illini White Student Union” Facebook page was created with the aim of intimidating black students on campus, even calling members of the Black Lives Matter movement terrorists.

In both cases, there’s no proof University students were behind the cowardly acts, but they were probably done by students, and they were definitely done by members of the Champaign-Urbana community. Either way, students who identify with the targeted populations were made to feel uncomfortable and unwelcome on their own college campus.

If you support immigration reform, you have the right to express those beliefs; however, there is a constructive and respectful way to do so — without intimidating students on their way to class.

As college students, there are more resources available for us students to express and learn new things, whether that be joining a club or signing up for a class. Students who are legitimately concerned with the future of the country and its leaders should find ways to express their views that may prove more beneficial or impactful. Instead of taking to social media or sidewalk chalk to make a point, join RSOs or take classes to learn more about the issues facing the U.S. and world, and express your opinions in a more sophisticated manner.