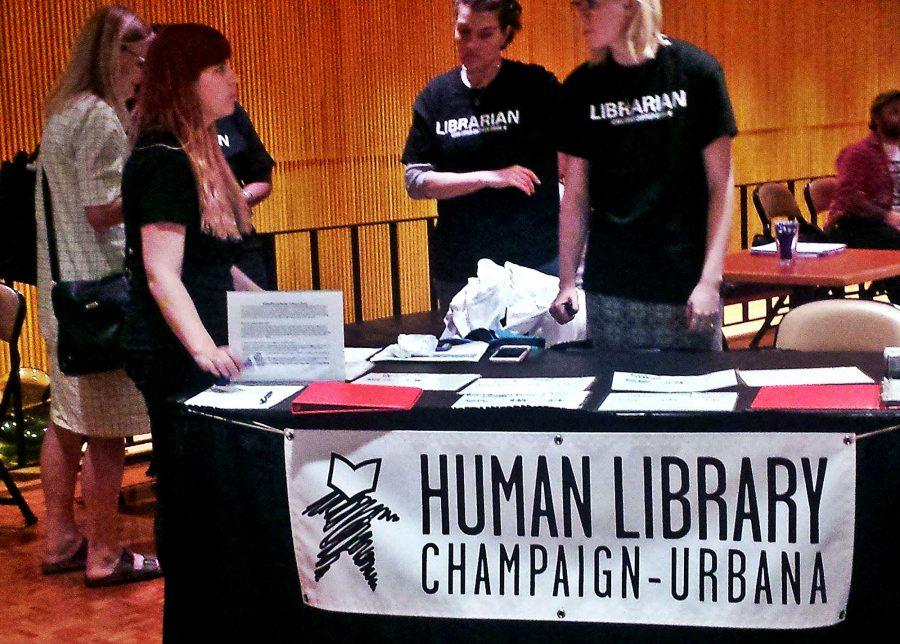 Visitors attend the Human Library event as a part of the Pygmalion Festival at the Krannert Center for Performing Arts.

Among many groups gathered for the Pygmalion Festival at the Krannert Center for the Performing Arts, there was one that stood out with its intriguing name: the Human Library of Champaign-Urbana.

The Human Library held its first event in Champaign on Sept. 22. At the event, the hosts continuously manage and organize attendees, while people wait for their turn to borrow a “book,” which is a person they are able to rent out. These people often struggle to fight a specific stereotype and are able to tell their stories for half an hour or so.

The event presents an opportunity for the public to understand the struggles of some of their community members and stay open-minded.

Nisha Mody, a graduate student at the School of Information Sciences, became engaged with the Human Library project when she volunteered at the Chicago chapter. She was interested in the learning experiences that the Human Library could bring her by interacting with people of various backgrounds. As she moved to Champaign-Urbana area, she started organizing a chapter of her own by gathering volunteers and planning over the summer.

As Mody reached out to members of the community, Sarah Christensen joined in and stood with her at the frontline of the event. Christensen works at the University’s library, and her effort was paramount in making sure that the event ran smoothly. Together, they were able to create a non-traditional venue for people to meet and learn about different stereotypes.

For the Human Library of Champaign-Urbana, readers chose books from selections such as Lesbian, Black Muslim, Female Martial Artist, Male Eating Disorder, Non-Veteran PTSD and Air Force Veteran. Although it was only the first year of hosting such an event, there were a significant number of people who showed interest and participated.

I was able to join in the event by simply picking out a book and signing up for the next available time to read. After choosing to speak to someone of the lesbian minority group, I was soon greeted by one of the volunteers. We immediately started an open discussion about how she came out to her parents, attitudes of those who know about her sexual identity and her feelings on how LGBTQ matters have evolved over the past 50 years.

Although 30 minutes is a short amount of time to listen to someone’s complete view on their experience fighting against societal stereotypes, I enjoyed reading the book. It was an interactive learning experience that I won’t be forgetting anytime soon.

For those who volunteered at the event, I would commend them on their courage in displaying themselves and letting strangers read about their lives. They are placing themselves in a vulnerable position to help educate the public about their experiences as representatives of minority groups. In a society where books are so easily judged by their covers, they were open and transparent about very sensitive topics.

The Human Library of Champaign-Urbana hopes to expand to different areas of the cities and to share stories as often as it can. I encourage everybody to check out books of their choices and become more educated readers.

Whether it’s a one-on-one talk or a group discussion, you can find answers to the questions that make you most curious and develop a better understanding of them through dialogues with real people.

Da Yeon is a junior in ACES.