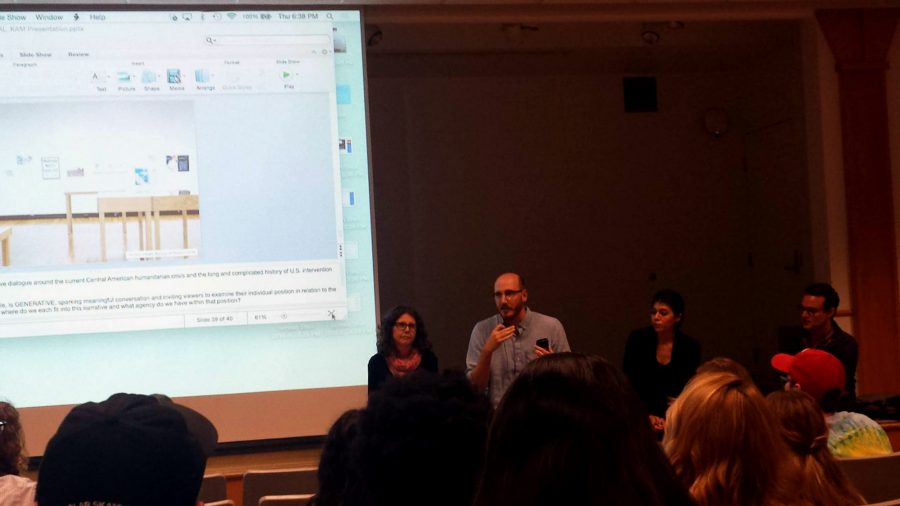 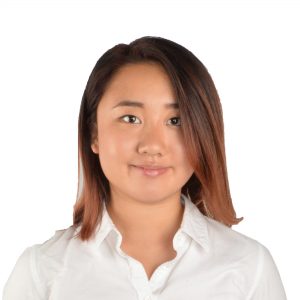 Working at the Krannert Art Museum, I often get to overhear what the visitors say about the different exhibitions.

Some exclaim about the colors, texture or the story behind the artwork. Others will silently admire each piece as they slowly move along the walls of the Kinkead gallery or the Ancient Peru artifact collection. However, there is one gallery that frequently puzzles the audience and makes them question if it can be considered “art.”

Most of the galleries remain the same throughout the year as they showcase the pieces that Krannert owns, but the Contemporary Gallery is hosting artwork from the Borderline Collective until Dec. 22. Once you step inside the blank space filled with random objects including a water tank, posters of bananas and mini-televisions, you will wonder what the artists were thinking.

After you read the writings on the wall, you will realize that the Borderline Collective is all about the immigration issue in the Northern Triangle area. The area includes Guatemala, El Salvador and Honduras. It is known as a region from which many migrants come to the United States to flee political conflicts or to improve their living standards.

This exhibit is the perfect opportunity to gain insight on the issue of immigration, one of the most controversial topics during this year’s presidential election. While many focus on the ongoing Syrian refugee crisis, there has been an issue of U.S. involvement in the Central American region for decades.

With Election Day coming up, everyone should consider the implications behind building the border higher and restricting the migrants even further by separating them from their families on the other side of the wall.

Artists of different backgrounds gathered at the exhibit to recreate a sense of the magnitude of the problem outside of the borderline area. Jason Reed, Erina Duganne, Mark Menjivar and Adriana Corral used their interpretation of the topic of immigration to communicate with the public via their artwork. The exhibition has previously been hosted in cities such as San Antonio, Texas to raise awareness.

The artists arrived at Krannert Art Museum to see their work displayed and to receive feedback from the students at the University on Oct. 6. Each of the artists explained how they became engaged in the project and what they wish to communicate through their artwork, whether it is in the form of photography or typography.

Before attending the exhibition and discussion session, I had no knowledge of what the immigration issue in Central America is really like, nor how severe the conditions are for the children who often attempt to migrate without their parents. As one of the artists mentioned in the discussion panel, the issue deserves more attention since it is so close to home and said that we should also face the question of what the purpose of the border is.

The Borderline Collective definitely accomplishes its purpose by opening a dialogue between teachers, artists, students and community members. As a non-traditional form of a social art project, it critiques systemic issues and raises questions about human rights violations for the immigrants — who are often voiceless due to the language barrier and a lack of attention from the media.

Especially during the current election season, it is important to keep an eye out for how the presidential candidates treat the issue of immigration. Very often, such matters receive minimum coverage during the debates because they are not as attractive as Donald Trump’s hair or Bill Clinton’s affair.

While presidential nominations should be based on numerous factors that determine the future of the nation, immigration in the Northern Triangle is an important aspect that should be considered when voting.

We can either build a wall to keep more migrants from Central America in Mexico or carefully examine the implications behind constructing pointless and unrealistic barriers.

Da Yeon is a junior in ACES.